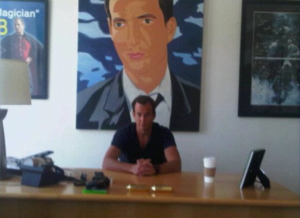 Conan O'Brien, recently announced as starring in the second of two Batman: The Dark Knight Returns direct-to-video animated feature films, will also appear in at least one new episode of Arrested Development, the cult-favorite Fox sitcom coming back later this year via Netflix. Will Arnett, one of Arrested Development's stars, let the news all-but-slip on Conan, O'Brien's TBS late night talk show, last night during an interview. Speaking with O'Brien and his sidekick Andy Richter (who played identical quintuplets, including himself, on the series's original run) on the show last night, the star said everything he could without actually technically revealing the casting news. "I don't want this to be too much of a spoiler alert, but let me put it this way: that there are a few people on this stage tonight who are a part of it," said Arnett. "And I think we know who we are." Richter responded, "A few means more than two." To which Arnett responded, "Yup, and less than four." "It's been about seven years of Huffington Post headlines of 'Are they going to make the Arrested Development movie'?" Arnett said. "I actually had the opportunity to meet Bruce Springsteen, and he asked me about it," Arnett said. "I was like, 'Buddy, I don't know. What can I say, Boss? We're doing our best.'" He added, "I did not call him the Boss." Since being booted from The Tonight Show in a controversial move by NBC, O'Brien has achieved the same kind of cult status among anti-establishment pop culture junkies that Arrested Development has enjoyed since its cancellation years ago. Check out the video below.