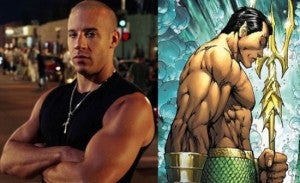 In a new interview with Maria Menounos, Vin Diesel reiterated an earlier claim that he had made that when he first met with Marvel Studios it was about a film that would be introduced in the Phase Three part of Marvel's plans. In describing the project, Vin Diesel said, “It was even talking about something so big that I can’t even talk about, because it’s like a merging of brands in a way, which I won’t get into.”

However, the "merging of brands" comment has also raised speculation that it could be some type of crossover between different studios. Some fans are thinking a FOX or Sony crossover with Marvel Studios with Vin Diesel playing a character like the Silver Surfer.

However, why would Marvel Studios want to involve Vin Diesel in a crossover with FOX or Sony? It doesn't make a lot of sense, but there is another studio where it would make a great deal of sense. Vin Diesel has a very strong relationship with Universal Pictures, which is the studio behind both the Fast & Furious movies and Riddick.

At the Kapow! Comic Convention in the UK in 2012, Marvel Chief Creative Officer Joe Quesada stated that to the best of his knowledge the movie rights to Namor the Sub-Mariner had reverted from Universal back to Marvel Studios.

We’ve speculated in the past that Marvel Studios could be building toward a Defenders movie as part of Phase 3 or Phase 4. Since Universal Pictures only has rights to Namor the Sub-Mariner, they can’t exactly build their own universe. What if the “merging of brands” that Vin Diesel is referring to is Marvel Studios and Universal Pictures working together on a Namor the Sub-Mariner movie starring Vin Diesel?

Could Vin Diesel Be Hinting At Playing Namor The Sub-Mariner?