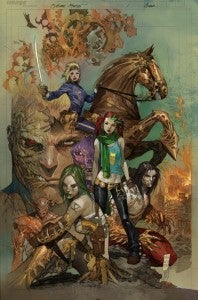 For those who haven't heard, or didn't read our coverage of the Top Cow panel at Comic-Con, Marc Silvestri's Cyber Force is returning to comic book stores in October as a free 22-page comic book to celebrate the 20th anniversary of Image and Top Cow. That Top Cow, a company with not-insubstantial assets, has elected to fund the project via Kickstarter was the source of some wailing and gnashing of teeth in the first couple of days after the project was announced, but after only two days live on Kickstarter, the project is more than one-third funded. That's right, of the $75,000 they hope to recoup in order to make a free Cyber Force comic a reality in the direct market, Top Cow has raised just under $28,000 ($27,990 as of this writing) in just about forty-eight hours, including a $20,000 first day. Kickstarter is traditionally used for independent creators or small studios to bankroll projects that they couldn't otherwise make a reality, but is becoming more and more common as a tool for established artists to develop work independent of a publisher's restrictions. Creators like Paul Jenkins and Jimmy Palmiotti have recently funded successful Kickstarter comics, and other creators--from prose writers to filmmakers--have taken to the crowdfunding site to essentially beg the masses for the money to make their dream projects happen. In exchange for providing the funds to make producing a work a reality, fans are usually given early access to the work, exclusive perks that are only good for the Kickstarter backers, or other such goodies. Whenever someone who is perceived to have money elects to turn to Kickstarter for help, though, a segment of the audience tends to bristle. When Kevin Smith mentioned that he may try to crowdfund his independent horror film, Red State, there was a not-insubstantial outcry on the part of people who thought he was somehow abusing the goodwill of his dedicated fan base. (Ultimately, the director elected not to  use Kickstarter for that project and to pay for and distribute the film on his own, taking it on the road with him and charging higher ticket prices to see the film in exclusive theatrical runs that featured Q&A sessions with Smith and sometimes other people involved with the production.) Top Cow drew similar criticism when Cyber Force's Kickstarter initiative was announced, but managed to win over the audience at Comic-Con, telling them that they were looking for new ways to introduce readers to comics. They also handed out a free, San Diego-exculsive ashcan comic that shows off most of the character design work featured on the Kickstarter page. In addition to releasing the comic free to the direct market, Top Cow's Marc Silvestri and Matt Hawkins said that the free Cyber Force issues will be uploaded to bittorrent sites on the Internet, with a page in the back directing fans to visit a comic book store for more--including a free print copy of the issue they just read--if they enjoyed it. "Most comic book Kickstarters ask you to donate money for an item that will be offered for sale to make a profit; Cyber Force is unique because your donation not only rewards you with unique items not available elsewhere, but allows you to share your love of comics with a huge worldwide audience. More than that, it's about challenging the status quo," explains Top Cow on the Kickstarter page. In exchange for backing the project, supporters on Kickstarter can get backer-exclusive variant covers, a web-exclusive hardcover edition of the first five issues, original art and more. Also available? Those San Diego Comic-Con International ashcans, which were available only to those who attended the Top Cow panel before the extras went up as premiums on the fundraising site. The comic itself will be written by Marc Silvestri, who will also draw the covers, with interior art by Koi Pham, although Silvestri said that he will also be doing some interiors, "which we will keep as a surprise," but which fans can buy on Kickstarter. "The goal of this is that we're trying to get the people who used to buy comics in the nineties to possibly come back and try it again, and with the rebirth of the Top Cow Universe it gives us an unparalleled opportunity to bring it back and try this again," Hawkins said at Comic-Con, explaining that Cyberforce sold over 100 million copies in the 1990s. Check out the trailer for Cyber Force's Kickstarter below, and be sure to let us know what you think in the comments, on the message boards or on social media.