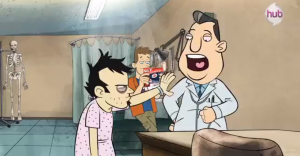 The socially maladjusted Dan will take on the common cold this weekend on The Hub, as the character falls ill and then, outraged by modern medicine's failure to cure the common cold, sets out to do so on his own, presumably in a gleefully violent way.

That's on this weekend's episode of Dan Vs., set to air Saturday at 4:30 p.m. We've got a preview of the episode below.

"What was funny about Dan was realizing as we went along that these people were writing things that Dan was angry about, which make me angry, too. They have no way of knowing this; they don’t know anything about me as a person but I found myself, especially with traffic and technology–these are things that annoy everybody," said series star Curtis Armstrong in an interview with ComicBook.com back in November. "Very early in the process, I found a root to the black heart of Dan, which is very easy for me to access because sometimes it’s frightening how much he reminds me of me."

Given the size and severity of the flu season this year, it's a safe bet this is one of those instances--where everyone pretty much can look at Dan and say that even though he's a dangerous sociopath, we all hope he wins out!

Check out the official episode description and the teaser below.

In the January 19 (4:30pm ET) episode "the Common Cold," after becoming sick for the very first time in his life, Dan heads to the Department of Controlling Diseases in hopes of ridding the world from the Common Cold!

Dan Vs. The Common Cold: Video Preview of This Weekend's Episode

Werewolves Within Review: An Endearing Ensemble Keeps This Whodunnit From Being Dead on Arrival