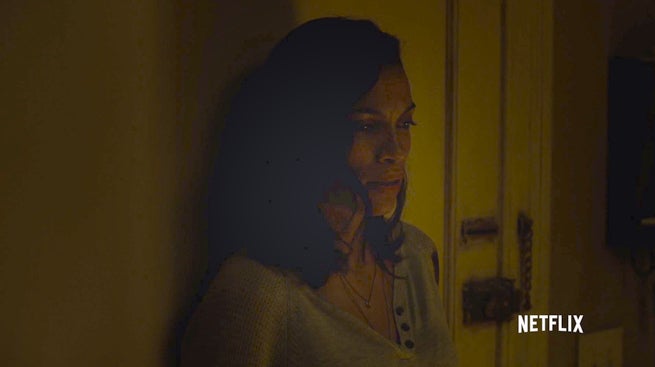 The episode opens with Daredevil bleeding inside of dumpster, gasping for air. How he arrived there is a mystery, for the moment.

A man finds Daredevil in the dumpster, and calls for help. A woman named Claire Temple (a.k.a. Night Nurse) hears his cries, and rushes over assist. The two take Daredevil to a Claire’s apartment. They put him on the floor, and Claire begins examining him. She unmasks Daredevil in her examination, getting a full look at his face. She then finds a bleeding wound on Daredevil’s torso and tries calling 911. But, Daredevil gains consciousness and tells her to stop, saying that the man who stabbed him would kill everyone in the hospital just to get to Daredevil. Daredevil pulls himself up and tries leaving, but collapses and faints.

Daredevil’s memories cut to a flashback from his childhood, where young Matt watches his father box on television. When Jack comes home later, the two discuss Jack’s failed match, and Matt bandages Jack’s boxing wounds. Jack gives Matt a drink of liquor to steady his hands while stitching his wounds. Jack then tells Matt that he must finish his homework before going to bed, citing the importance of studying once again. Matt sees the wad of cash Jack received from the match—much more than a losing man should get—and wonders if Jack was paid to lose the boxing match.

Back in the present, Karen Page sets up her desk at Nelson and Murdock’s law office late at night. Foggy enters, and the two chat. Foggy convinces Karen to stop working and go out with him for a drink with Matt.

Unfortunately, Matt can’t make it, as he currently remains under Claire’s care. When he comes to, Claire runs through all of the wounds Matt inflicted. She says that she’s “something like” a doctor, but says the less Daredevil knows about her, the better. Daredevil thanks Claire for her help.

Matt enters a flashback from when he was in the hospital right after he went blind. His enhanced senses start kicking in, causing him to panic, but Jack is there to soothe him.

Daredevil wakes up the present on Claire’s couch, unable to breath. Claire surmises that his lung collapsed and opens his airway with a needle. Recovered, Daredevil then explains how he tried stopping a kidnapping (from the end of Episode 1). A child was being kidnapped for a Russian-led human trafficking ring. Daredevil followed the van that kidnapped the boy. But when he arrived the van’s destination, he discovered that the group of men were actually waiting for Daredevil; the entire scenario a trap. Daredevil says that he barely escaped the ambush, but his assailants are still out there, with the boy, looking for him. Daredevil quickly stops and says that someone else has entered Claire’s apartment building. But how does he know. Daredevil says that he smells a man in the building, a few stories below.

Matt then flashes back to his childhood, where he studies brail in a gym while Jack trains in the boxing ring. Matt explains how brail works to Jack. Then, two men named Roscoe and Sweeney enter the gym, and tell Jack that he has a match with a man named “Kreel.” They tell Jack that the has to throw the fight, but Jack refuses. Roscoe and Sweeney threaten that if Jack doesn’t throw the fight in the fifth round, they’ll kill him and leave Matt an orphan.

Back in the present, Daredevil gets up and readies himself for the new man in the building. The man knocks on the door and says he’s a New York City cop named Detective Foster. When Claire opens the door, Foster says that he’s looking for black-masked man, concocting a story that he robbed a nearby Bodega earlier that night. Claire says she saw nothing, and Foster leaves. Daredevil doesn’t buy it though, and correctly posits that the cop is really a Russian thug in disguise. Daredevil then exists the apartment and subdues “Detective Foster” with a fire extinguisher before he exits the building.

Across town, Foggy and Karen grab a drink at Josie’s, a dive bar near Nelson and Murdock’s office. They banter for a bit, and keep the drinks flowing. Foggy prods Karen about waking up with the dead body in her apartment. She recalls how if the “man in the mask” didn’t save her, she’d be dead. Karen says she doesn't “see the city anymore”; all she sees are “dark corners” and “threats.” Foggy tries comforting her, saying that Hells Kitchen is full of decent people. He comforts her, and the decide to stay out for the night.

On the roof of Claire’s apartment, she and Daredevil tie the unconscious, Russian thug up. Claire tries asking about Daredevil’s unique abilities, but Daredevil interjects and asks why she’d help a masked man in a dumpster. Claire explains that recently, during her shifts in an emergency room, a number of injured men have come in, and claimed that they were thrashed by a man in a black mask. She says that Daredevil’s reputation is spreading fast in Hell’s Kitchen, so when she found him in the dumpster, she knew he was the vigilante the wounded ER patients described.

Matt has another flashback to his childhood home. There, Jack opens a package containing his red and gold boxing robe. They talk about never quitting, and the importance of always getting back up. Jack then calls a bookie and bets on himself to win the boxing match against Kreel. He tells the bookie to put the winnings in a private account in Matt’s name. Jack makes another call to a woman, and tells her (via voicemail) that Matt will soon need her help.

In the present, a drunken Foggy and Karen go to Mat’s apartment and try getting him to come to come to the door. They want Matt to come party with them, but Matt obviously isn’t home. So, Karen and Foggy continue to walk the streets of Hells Kitchen by themselves, bonding.

Nearby, Daredevil interrogates the now-conscious Russian thug on Claire’s roof. Hearing the thug’s heartbeat, Daredevil knows when he’s lying or not. Telling the truth, the thug says he doesn’t know who the Russians sold the kidnapped boy to.

Using extreme methods of torture in his interrogation, Daredevil tells the man that he enjoys causing him extreme pain. The Russian finally tells Matt where he can find his boss. Daredevil returns the favor by dropping him off the roof. He tells Claire that the thug will live. He then tell Claire to hide somewhere safe in the city. She tells Daredevil where she’ll be, in case he needs more medical help later in the night.

In the past, Jack Murdock enters the ring for his fight against Kreel. With Matt watching the fight on TV at home, Jack defeats Kreel. Jack then tries fleeing the boxing ring before the mobsters can kill him, but he’s too slow. They shoot him dead in an alley near his apartment. Matt hears the gunshot in the apartment, and runs to his dead father.

In the present, Daredevil ambushes the Russian gang leader’s hideout. They still have the kidnapped boy with them. Daredevil, badly wounded, struggles to subdue all the men. He ultimately succeeds however, and rescues the kidnapped boy.