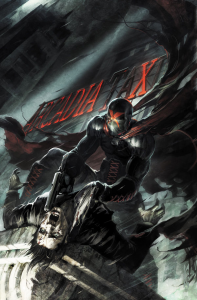 Duane Swierczynski and Eric Nguyen will take on the classic Dark Horse Comics vigilante X beginning in May, and the publisher has provided a preview of the series, which you can see below. Originally written by Steven Grant, the character first appeared in Dark Horse Presents back in 1994 before going on to star in his own series. A cold, lethal vigilante in the mold of Rorscach from Watchmen or Frank Miller characters, X's new appearances are being promoted by Dark Horse using the "Super: Brutal" tagline. Other notable creators to work on the character over the years include Doug Mahnke, Matt Haley, P. Craig Russell and Jimmy Palmiotti.