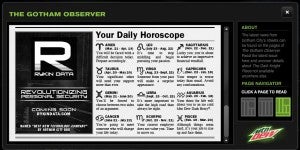 One of the many secrets that Mountain Dew’s new Dew Gotham City website appears to offer is whatever information rabid Bat-fans can glean from cryptically-worded issues of the Gotham Observer. Everything from the stories to the ads are being parsed by fans hoping to get a clue, but the item generating the most curiousity is probably the horoscopes.

There's probably not a lot of information to be gleaned by these as they regard specific characters because in general, the birthdates of comic book characters aren't known. Even if they are established in the comics, there's the added wrinkle that the Nolan Batman Universe probably has its own thing going on and isn't that preoccupied with Silver Age comic book minutia. All of that said, let's dive in and see if we can't make some educated guesses, if only for fun.

Aries: Well, since this one is both profoundly generic, and also my horoscope, I'll say that "You will be faced with a difficult decision today. Plan accordingly" refers to whether or not to make a joke about this lame horoscope.

Taurus: It says "your significant other will need your support now more than ever." Possibly directed at Jim Gordon's wife, or at Selina Kyle? She seems pretty tight with both John Blake and Bruce Wayne at different times in the film and, let's face it, neither of those guys seems to have all that easy a go of it in this film from what we've seen.

Gemini: "You'll be forced to choose between two sides of an argument." Well, that could be anyong in Gotham, given that an all-out class war seems to be coming, but it's most likely directed at Selina Kyle. More even than the one above, it seems likely that Catwoman, who has alwasy skirted the edge of good and evil, will be forced to decide whether to throw her support behind Bane--she's scared of him and his strength in numbers would seem a selling point. Still, her heart always runs toward Batman...!

Cancer: "You're going to meet someone who will change your life today." For my money, this sounds like the kind of horoscope that John Blake might get just before he meets the young boy we've seen in the trailers--the one who seems to be making him think long and hard about Batman's legacy in Gotham, and might inspire him to do something about it in the Caped Crusader's absence.

Leo: "It's time to stop middling and start pursuing your passion." It might be hard to guess exactly who this one is directed at, but I'll say this: my wife's birthday is August 15, and she's a Leo. 8:15 is the time on the clock that serves as a combination to the Batcave's secret entrance--this is well-documented because it's the time that Bruce Wayne's parents were killed. So for the word "time" to show up in the horoscope for people born 8/15? Well, that seems pointed. It may be that Nolan engaged a little bit with his inner fanboy on that one.

Virgo: "Someone from your past will make a surprise appearance." There are plenty of people who are rumored to be showing up again in this film, including some from Bruce's past. Ra's al Ghul is defnitely going to appear in teh film, even if only in a flashback; The Scarecrow reportedly may appear again. And of course, in the Batman story Knightfall in the comics--upon which this movie appears to be at least partially based--almost everyone Batman ever put away is freed by Bane as part of a strategy to break Batman.

Libra: "It's more important to take the high road than to always be right." Is it just me, or is that EXACTLY the kind of thing that Commissioner Gordon might tell an opportunistic younger officer like Matthew Modine's Foley, who appears to be gunning for Gordon's job?

Scorpio: "Your current employer does not value you. Time to move on." Well, Lucius Fox has heard that once already--in Batman Begins--and all it really did was persuade him to get more actively involved in Bruce Wayne's life and make his current job a more viable one. Could we be seeing a repeat of that theme here?

Saggittarius: "Lucky you. You're about to experience an impressive financial windfall." Well, if that isn't about Bane, then it's got to be about someone in Gotham who's deeply corrupt. We've seen Bane's men taking over the Gotham City financial district, something that should collapse the local economy--but who's to say that, as in real life, there aren't some people betting against the market who stand to make a killing if they know what day everything's going to hell in a handbasket?

Capricorn: "Your temper is worse today than usual. Avoid any confrontations." Bane is at his best when he's cold and calculating. Throw some emotion into the mix and he becomes much more vulnerable. Could this be directed at him?

Aquarius: "Your thirst for life will direct you to an ice cold Mtn. Dew Dark Berry." Good lord.

Pisces: From what I can find online, it appears as though both Bruce Wayne (February 19) and Selina Kyle (March 15) are Pisces. Something's gotta be made from that, right? Well, anyway, the fortune says that "Although things might seem hard, it's your job to rise up and face them." Well, let's think about that analytically--Selina is established as being terrified of Bane, who appears to be in control of the city for at least some portion of the film. Then there's Bruce--if rumors are to be believed, things will get very, very hard for him for a while and he'll have to both figuratively and literally rise in order to retake the night...!