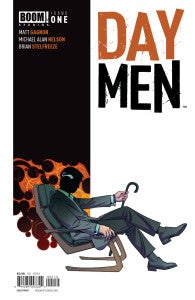 Universal Studios, the producers of 2 Guns, have optioned Day Men, a new comic book series from BOOM! Studios, to be developed as a feature film, Deadline is reporting.

The vampire drama from writers Matt Gagnon and Michael Alan Nelson and artist Brian Stelfreeze launched in July. Its second issue has yet to be released, with some retailers erroneously listing it as available on August 14.

2 Guns, which cost $61 million to make, has generated $59 million in just under three weeks and has yet to record any international numbers. BOOM!, which recently bought Archaia, is the publisher of that book as well.

The series follows a group of humans who protect vampires as they sleep during the day; when a war breaks out between two rival vampire families, things start to get complicated for the "Day Men."