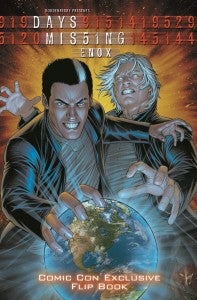 Trevor Roth, the creator of Roddenberry Entertainment's Days Missing, joined ComicBook.com recently to talk about the series' upcoming third volume, Enox. Written by Phili Hester and featuring art by Jeremy Rock, the story will close out the arc of The Steward, who has been at the heart of all of the stories told so far in the Days Missing universe. "He's a very talented guy," said Roth of Hester. "He knows the characters and the voices and the tones and what we're trying to accomplish as a creative force. He took it and brought it to a whole new level and this series just seems to get better with every volume for us." Of Dale Keown, who returned to work on the cover for the Comic-Con exclusive preview that hit last week, Roth simply said, "I don't know how you get to be able to do that." "Days Missing is actually as much as it deals with time and in my opinion looks through the lens of time at our characters and their experiences, in truth it isn't a time-travel book at all," explained the writer of one of the most common misconceptions of the work. "[The Steward] cannot time travel and it was a very important restraint on his power that we wanted to make sure was in there. In truth, because he cannot time travel, there become consequences to his actions that he can't fix and that's one of the most interesting things about The Steward--the very human quality of, if you do something today, it's going ot have an effect on tomorrow and it's not something that you can take back. The truth of the matter is, he can't go back and say 'Oh I really screwed up during the Roman times. I'm going to go back there and try again.' I think that's one of the key characteristics of the part of him that is human." Of course, just because this is wrapping up the current arc with the character, doesn't mean it's necessarily the end of his road, says Roth. "He has many many questions still to answer so while we're going to wrap this story up there's a lot left in him if we decide to go there." And, like Christopher Nolan's just-released film The Dark Knight Rises, Days Missing will try to overcome the curse of the third volume in a trilogy. "Call it dumb luck call it genius planning--I couldn't tell you which--but when the idea for Days Missing was created, it was always that this story was seen as a three-act play if you will," said Roth. "We've obviously gone through the first two in the first two volumes and while in many trilogies you often find that the second movie is the best, this third book I think is the pinnacle because it's something that has been built to by the first two volumes and it brings everything to a head and it's going to be a fantastic end to this story arc." "Roddenberry is embedded in making universes and I think that is our tradition," Roth said of the giant canvas that he and the other writers have had to work with on Days Missing. "That's what we're very strong at, is creating these universes--and when a storyline ends in a universe, that universe goes on and those characters go on and because of that sometimes I move away from calling it a trilogy because that suggests that that's all there is to this universe and that we're going to try and wrap up every single thing." He added, "If you look at the idea that this is about a being who has been around for so long and has interacted and intervened with humanity throughout its history, but is a truly lonely and tragic character because of that, and you recognize that in this story it is about him realizing that there's someone else living on his plane and recognizing that could mean something tremendous to his existence, then you really look at it and see this third book really brings to the forefront now the reveal fo that person and what does it mean and who is it and what is his personality and bringing that sort of interaction to the forefront to me really is a single story and we will end that story in the sense that you'll have resolution and feel satisfied but you're right to say that not everything will be done. You don't  feel like 'and…end.' There are many more stories to be told of the Steward's universe. Our history is long and our history is interesting and that he has been a part of, and our future will be and he'll be a part of that."

Days Missing Creator Trevor Roth on Wrapping Up The Steward