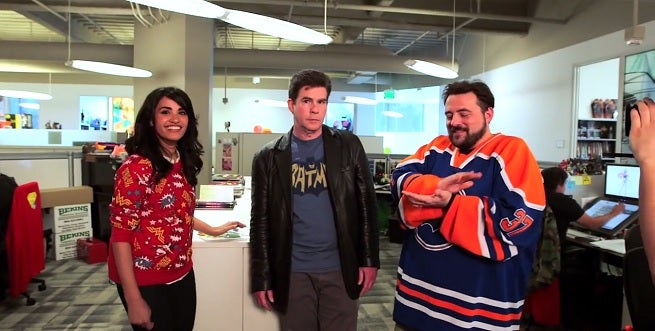 DC Entertainment has released a blooper reel from DC All Access, the webseries that goes behind the scenes of DC's ongoing and upcoming works with creator interviews, clips and the like.

The video features a lot of quick cutting, giving more of a sense of fun behind the scenes than a lot of real context for the moments depicted, although you could probably go find context by watching some of the previous episodes, which run on DC's YouTube channel and are generally picked up my media since they often have at least one interview featuring new information.

You can check it out, along with the official description of the "bonus clip," below.

When we say All Access, we mean it! In this exclusive DC All Access bonus clip, we give you a glimpse of some of the laughs, mistakes and overall craziness from the cutting room floor. Featuring Tiffany, Blair, Dan DiDio, Kevin Smith, Ralph Garman, Scott Snyder, Kevin Conroy, Jeff Lemire, Tim Seeley, Nicholas D'Agosto, John Romita, Jr. and more.