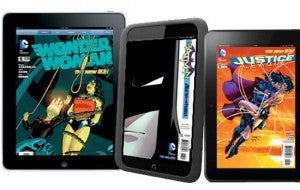 Last week, DC Entertainment announced that their serialized, monthly comic books were headed to the Apple, Amazon and Barnes & Noble tablet marketplaces, where they're sold as ebooks rather than periodicals.

The practice seems geared toward keeping digital distribution apace with print copies, assuming ComiXology to be the digital equivalent of the direct market and the ebook storefronts to be a stand-in for traditional bookstores (Nook is carried and supported not only by Barnes & Noble but also Books-A-Million).

It's also likely a move calculated to bring in more prospective casual readers, especially as Arrow and Man of Steel start to raise DC's non-Batman profile in other media.

Still, the first days were a bit clunky; the promotional image released along with the initial press statement featured three comics pictured on an iPad, a Kindle Fire and a Nook HD. None of those three comics were actually available in the ebook markets that day, though they had been available in the direct market and on ComiXology for weeks.

That first day, there was also some kind of hiccup in the system that gave Barnes & Noble's Nook users a discounted price (about 15% off) for any single-issue comic with a cover price higher than $2.99--something that has since been corrected to bring the Nook prices in line with other digital platforms.

Looking at some of the most common and popular questions raised by fans on social media, ComicBook.com reached out to Hank Kanalz, DC Entertainment's Senior Vice President of Digital, to try and clarify a few points.

Back issues are coming to your favorite platform soon: "We will be adding backlist titles over the next few months, more will be added each week, in addition to the same-day digital and digital-first titles that are released weekly."

Pricing will be the same regardless of the retailer you buy from, and pricing practices like rolling back issues over 30 days old will continue for the foreseeable future.

And, yes, DC is considering a digital subscription program that would allow fans to automatically download new release comics from their pull list for a pre-set rate: "We don’t currently offer subscription options but are considering this as a possible future digital feature. Stay tuned!"

That's obviously not much in the way of details, and it isn't (as some fans had hoped) an immediate rollout, but it's something.

Kanalz also told us that DC doesn't plan to change their release schedules for collected editions--which generally hit the direct market a week or two before they make it to traditional bookstores--following the day-and-date announcement for "floppies."

And for fans hoping to be able to transfer their content between devices, Kanalz says that's not on the agenda for the moment. "Currently, readers may choose which platform they prefer, but the purchases are currently not transferable between eco-systems," said Kanalz. "Much like if you buy a book on Amazon for a Kindle device that book wouldn’t port over to the Nook, our books currently don’t port across platforms."

Not just much like that, obviously; it is exactly that, as the comics are being sold as ebooks in the proprietary formats of their respective devices, not as a standalone comics-specific format or as something more universal.

That last question may seem like a bit of a pipe dream--no company wants to make it easier to copy and move their digital content around--but it's an important question to many digital comics readers. ComiXology does their best to make everything cloud-based, and there's a concern that if ComiXology were to crash, be hacked or go out of business, fans could lose content they paid for. That's happened outside of the comics market before, even with Wal-Mart, who recently dramatically changed the face of their digital offerings and informed customers, basically, that it was now or never to download a lot of their music. Certainly there's a school of thought that, even as competition is good for the market, the dissolution of ComiXology's monopoly on digital, monthly comics makes this threat loom larger than ever.