When DC recently announced that an iconic character would be rebooted as gay in the world of the New 52, fans exploded. There's excitement, resentment but most of all, curiousity. And in the course of speculating about who might be the character chosen, many fans have lost perspective on that original comment.

If the character is "iconic," what does that mean, exactly? It means different things to virtually every speaker, but since the comment was not made to the comics industry press it's hard to believe that it's being used in the loosest way, which is in the way that would appeal primarily to comics readers.

For many of us, virtually any character can be "iconic" because we know their best and worst moments. We know what makes them tick and, by and large, we care about them. This gives them an exaggerated sense of importance, like that band that was popular when you were in high school and so always seemed like they were bigger than Jesus when really they never got over that one time they opened for Nirvana.

For me, "iconic" when used in the context that DC used it suggests that the casual reader not of comics, but of that news article, will have heard of the character before. Not necessarily that they know anything ABOUT the character--The Flash, or Aquaman, for instance, could qualify as "iconic" just because if someone outside comics hears the name they have a sense for who the character is, that they're popular and have been around for a long time, even if they can't tell you exactly what the character does or the name of his secret identity.

It's likely that the phrase "iconic" was chosen by DC because it's nicely obtuse, but let's consider a few of the most popular candidates online and see how they stack up...!

(Of course, all of this assumes that they haven't just been teasing us and it won't turn out to be the Milestone character Icon.) 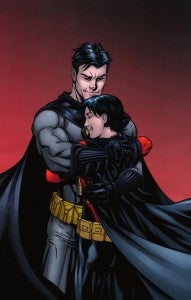 While your mileage may vary on this one, it's difficult for me to see Tim Drake as iconic. He's a great character--my favorite Robin, and frankly the only one who's ever made me care about the character--but iconic? Unfortunately, I think not, and for one easy reason:

If it were Dick Grayson we were talking about, then a simple name change wouldn't reduce his status from "iconic" to "just another comic book character. Dick's secret identity is widely known among those who don't read comics, after all, and so saying "Nightwing is gay" might get you a "Who's Nightwing?" But when you responded, "Dick Grayson," people would understand the relevance.

Tim, however, was the third Robin, and not one whose secret identity is widely known outside of comics. If you were to tell most people, "Red Robin is gay," and they said, "Who's that? Is that Batman's sidekick?" You will have lost their interest by the time you explain what Tim's historic role in the Bat-verse is and why he's wearing that particular costume. And why he's named after a burger joint is a whole other discussion. 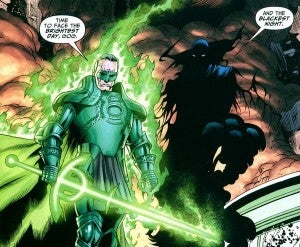 These guys came in at #1 and #2 on Newsarama's prediction sheet as to what character might be forced out of the closet, but iconic? It's a hard sell.

While Green Lantern and The Flash are certainly iconic franchises and names that resonate with people outside of comics (Green Lantern had a movie AND was mentioned in a Donovan song, while The Flash had a TV show and is often confused with Flash Gordon, which actually lends him more cultural cache), I have a hard time believing that ANY character on Earth 2 counts as "iconic." 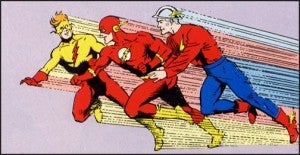 Unless it was the Kal-L Superman they killed off during Infinite Crisis (special because he's the first superhero), it seems to me that as soon as you lead off that press release with "Alan Scott, the Green Lantern of an alternate timeline," non-comics readers have tuned you out again.

Ironically, the reboot may have worked against these characters being called "iconic." Their status as World War II heroes really grounded them to the era when they were created and gave their lives a sense of timeless wonder that's missing in the New 52.

The last factor that, to me, helps to disqualify Alan and Jay is simple: There are too many guys who all go by that name. To mangle a quote from Aaron Sorkin's brilliant SportsNight, "In your search for things that are iconic, let the word 'one of a number of characters who go by the name' serve as a warning sign." 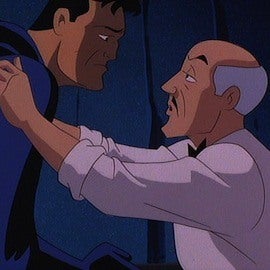 There is no doubt whatsoever that Batman's faithful butler Alfred is an iconic character. Known by name and used in literally every adaptation of Batman I can think of to other media, Alfred is a key part of arguably the most popular and important mythos DC has to offer. He's Batman's moral compass, and everyone who's ever heard of a comic book knows that.

He's not a superhero but that's alright--he's more important than most of them. 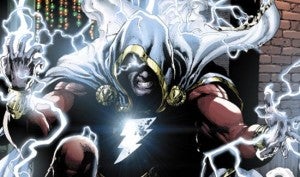 ur sources gave us Shazam a while back and part of the reason that story went live when it did is that he fit the "iconic" bill pretty well.

Inside and outside of comics, people can remember the Shazam! animated series and movie serials. It's a name with some cultural cache and a good deal of goodwill attached to it, a movie that's currently trapped in development hell but which occasionally shows signs of life, and fits the "iconic" bill better than most of the other also-rans that DC hasn't yet given a shot at a monthly series in the last five years.