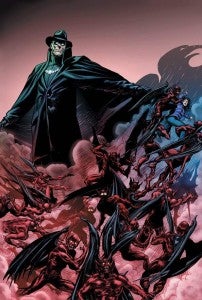 Saturday is always the biggest day at Comic-Con it seems in terms of what's breaking, what companies are releasing , and what surprise guests different projects have in store, and DC was one of the lead-off panels today to discuss what they have in store for the next phase of their now almost a year old new 52 initiative, as well as Wave 2, the second phase of the relaunch.  On hand to field questions from the crowd were DC Entertainment co-publisher Dan DiDio, creators Brent Anderson (Phantom Stranger) , Tony Bedard (Sword of Sorcery), Scott Snyder (Talon) and James Tynion IV (Talon).  Other special guests were on hand to help the panel facilitate discussion.

First up was Talon, with new writer James Tynion IV taking the reigns with this book, his first title.  "I can't wait to see more of Gotham's history, and not just Gotham, but the dark, secret history of the world.  We want to create a character who will exist for a long time, not just for one story arc." Snyder added, "It's a big book, and the Court of Owls has been hunting this rogue Talon for years, so it will have a lot of mystery and intrigue to it, a bit of The DaVinci Code to it.  I hope you'll support it."  Talk then turned to The Phantom Stranger and Dan DiDio.  DiDio discussed, "Part of the FCBD issue was to set up some mysteries for the next year of the DCU.  You saw Pandora introduced as well as Phantom Stanger.  What we've done in the zero issue is to go back to his origin and then flash forward to his current form to get a feel for what he's been doing since that time."  He also mentioned that the first issue will see the return of a popular character as well.  Traigon appears in the first issue, as well as Pandora.  It will appear to have a big role in the way the new DC world is unfolding.

Team 7 became the next focus for discussion, "I think these new wave books capture the sense of what the new 52 is about.  Something like Team 7 is a crucial book for us because it takes some Wildstorm and DC characters, like Steve Trevor, like Amanda Waller, Deathstroke, Black Canary and see how they became what they are now in the DCU.  It's a lot of fun because it takes a lot of coordination with other writers and to see just how we can balance out the stories," said DiDio.  Sword of Sorcery will see the return of Amethyst, one of DC's most well known characters from the 80s.  "I'm super excited to be on this book, because it fills a niche that we don't have in the DCU, that light fantasy."  The book will also have a backup feature showcasing Beowulf.  Christie Marks will be writing the new series.

It was also announced that Grant Morrisson would be working on some stories for next year with the other aspects of the multiverse, but no big plans were given at this time. Could there be a Superboy Prime story on the way?  Who knows.  DiDio also mentioned that Phantom Stranger #2 would cross over with All-Star Western.  More was explained about the Stephanie Brown and Barbara Gordon swap in the Smallville Season 11 series.  "Barbara Gordon is a more recognizable figure for the world as a whole.  Starting with Stephanie Brown was not the best idea because she is not as known for the Smallville universe and followers.  We had made Stephanie Nightwing first, but we decided to change that at the last minute because it just didn't make sense to go that way in terms of public awareness," said DiDio.