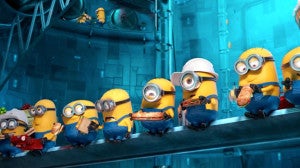 In case there weren't enough major movies opening in the summer of 2015, Despicable Me's Minions-centric spinoff was delayed yesterday, pushing its release date from December 2014 until July 2015.

It's not immediately clear what caused the delay; it could be anything from a pre-production slowdown started when Despicable Me 2's lead villain had to be recast with almost no time left in production, or it could be something more in line with moving the movie to the spot in the schedule where it can make the most cash. Despicable Me 2 is the #2 movie of the year, having brought in more than $350 million at the domestic box office alone in spite of having opened in the middle of this year's blockbuster-laden summer. Holiday movies tend to be somewhat more limited in terms of their "legs," since kids go back to school shortly after they're released so even a strong first two weeks is less likely to convert to long-term dominance.

Universal, who distributed the movie by Illumination animation, had already staked out July 3, 2015, for a different, untitled Illumination movie; that project is being pushed back to Feb. 12, 2016.

Because of the financial upside to the move, it's being considered a good thing, but it comes on the heels of this week's announcement that Pixar will delay its 2014 and 2015 movies, making 2014 the first year in nearly a decade without a new Pixar film in theaters. The Minions delay means another major animation studio not showing up to play, so it might be interesting to see how Dreamworks and Disney Animation respond to the vacuum.

Despicable Me Spinoff Delayed Until 2015