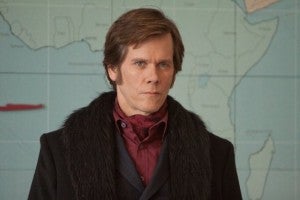 American actor and musician Kevin Bacon is in the U.K. this week--among other things, apparently shooting advertisements for a cell phone carrier out on public streets. Bleeding Cool report that, as he's doing so, he's been approached by bystanders and asked what it is he's shooting--for which his reply, sure to make some heads explode among those who don't get that hes joking? He's filming Doctor Who--because he's the new one, you see. At least one bystander went for it...or at least went along with the joke, tweeting it to British talk show host Jonathan Ross. Whoever it is, we'll surely be able to connect him back to Bacon within six degrees, though.

Doctor Who: Kevin Bacon is the Twelfth Doctor?!