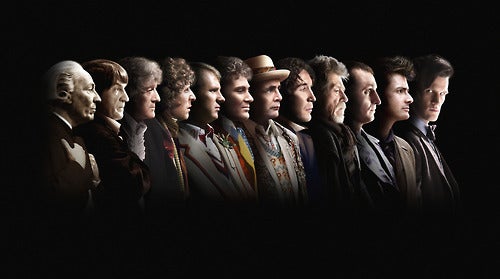 Recently, there has been some confusion in the world of Doctor Who. When the show returned in 2005, Christopher Eccleston's Doctor was considered to be the ninth Doctor, following Paul McGann's performance in the 1996 made for television movie. From there, successors David Tennant and Matt Smith were considered the tenth and eleventh Doctors, respectively, and Peter Capaldi was assumed to be taking over as the twelfth doctor. But then John Hurt showed up as "The War Doctor," a regeneration of the Doctor that viewers had never seen because his entire existence took place after McGann's movie, but before the fully formed Eccleston debuted in the new series. By strict, technical reasoning, that would makes Eccleston the Tenth doctor, shifting all of his successors' numbers up one as well. Showrunner Steven Moffat has suggested that, because The War Doctor rejected the name of the Doctor, he shouldn't be counted as a true Doctor for numbering purposes, but many fans aren't buying that reasoning. At Wizard World New Orleans, a fan posed the question to Matt Smith during a fan panel, asking the outgoing Doctor what number the new Doctor, Peter Capaldi, was. Here's what he had to say:

"Well, the thing is, I got really attached to eleven, and I'll always think, for my money, he's twelve. Because I like being eleven, because I like the number eleven. Then, there's a whole lot of Doctor Who science that might suggest otherwise because of John Hurt, the other Doctor. But for me, I think number twelve."

Smith also answered a question about Doctor Who's contribution to pop culture, having just reached its 50th anniversary. He said:

"I think it's really massive, actually, particularly in Britain. I think, even if you have never watched the show, in England, you know what the word 'Dalek' represents. You know that blue police phone box. You know what story it's from. It's sort of worn into the fabric of youth."

Peter Capaldi will take over as...whatever number Doctor he is when Doctor Who's new series, currently filming, debuts later in 2014.