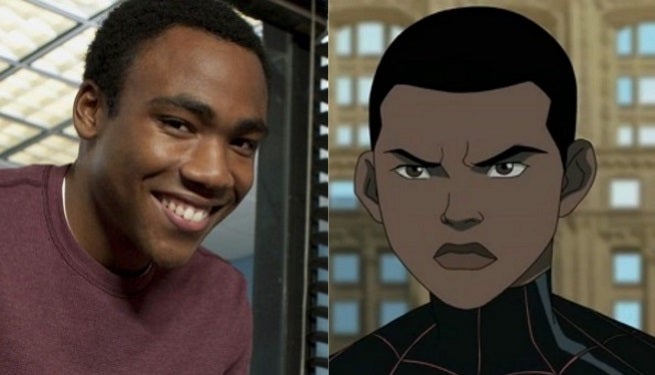 Miles Morales, who has been the Spider-Man of the Ultimate Marvel Universe since 2011, was partially inspired by Donald Glover. Glover's Twitter campaign to play Spider-Man in a live action film was noticed by Ultimate Spider-Man writer Brian Michael Bendis, who went on to create Miles.

While Web Warriors isn't exactly a live-action film, it's still something special for Glover, who has been a fan of Spider-Man since he was a child.

"I don't think it's hit me necessarily yet how big of a deal that is," says Glover. "I'm very grateful for that, and it's cool to read the comic now."

Miles' cartoon origin seems pretty close to his origin from the comics. His cartoon debut will see him teaming up with Peter Parker to take on the Green Goblin. In the clip below, you can see the two skirting around the awkward conversation about the death of the Ultimate Universe's Peter Parker.

"He meets someone who is his hero, and that comes across completely in Donald's performance," says Stephen Wacker, a former Spider-Man editor at Marvel Comics who's now vice president of Marvel Television's animation division. "He's got a real warmth that suits the character really, really well. If you've read Miles Morales comics, Donald's voice nails what you've been reading."

"I never liked Superman that much, because I was like, 'Yo, this dude can't die. It's too easy,'" Glover says. "Batman is pretty fly. He's a close second, just because he doesn't really have powers. He's just a justice-driven vigilante. Spider-Man is the best because you just don't know who he is, and he's funny and he's poor. I understand Spider-Man a lot on that level. He's just trying to make it."

While Glover is happy to see how much has come from his original comments on Twitter about wanting to play Spider-Man, and is happy to have the opportunity to voice Miles, he still holds out hope that his original dream of playing Spider-Man in live action will come true.

"I still have hopes to do something like that one day," says Glover. "I don't look at this as second place. Spider-Man, he's such an icon — you have to do something with him."

Persona Anniversary Announcement Isn't What Fans Were Hoping For

Night of the Animated Dead: Dule Hill and Katharine Isabelle Board Up the House In Exclusive Clip