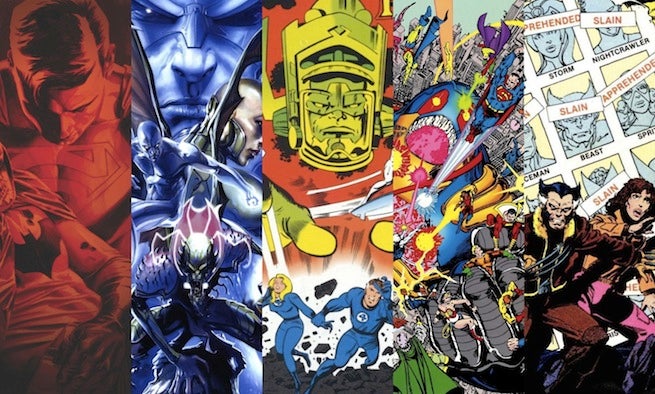 Come May, the Marvel Universe "as we know it" is going to end with the "House of Idea's" big event, Secret Wars. That's because the main Marvel "616" Universe and its Ultimate Universe are expected to collide, leaving behind a whole new universe on the Secret Wars' world of Battleworld. That's it. The end. Hope you all enjoyed the ride.

Not to be cynical, but end of the world scenarios (aka, doomsday scenarios) are not new to the world of comic books. Going back to the Silver Age, the "world as we know it" has been threatened by cosmic forces, supervillains and superhero ineptitude. While Secret Wars might actually mark the end times for Marvel, if history is to be trusted, some semblance of the "world as we know it" will probably find a way to survive.

So here are some of the most notable end of the world stories in comic book history. Perhaps, once again,  the reports of the Earth's death have been greatly exaggerated. 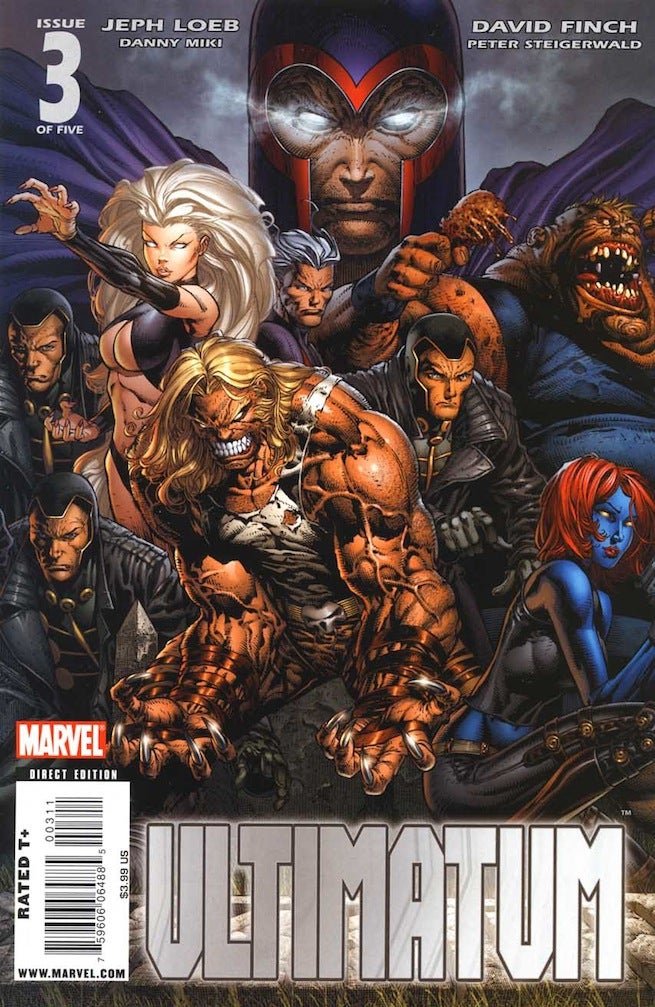 A few years before Cataclysm was supposed to end Marvel's Ultimate Universe, Ultimatum marked the first time the company's alternative world faced doomsday. In this storyline from Jeph Loeb and David Finch, Magneto is so outraged by the deaths of Scarlet Witch and Quicksilver in Ultimates 3, he manipulates the Earth's magnetic poles and a series of disasters threaten to destroy the planet.

Unfortunately, history has not been terribly kind to Ultimatum, as many fans and critics consider it to be one of the worst storylines from the past decade. A number of popular characters were unceremoniously killed off, some in extreme and grotesque fashion (the Wasp was cannibalized by the Blob, who in turn is decapitated by Giant Man). And while Ultimatum didn't actually end Marvel's Ultimate line, many fans believe that the universe has never been able to recover from the event's unpopularity – hence the multiple attempts to end the Ultimate Universe ever since. 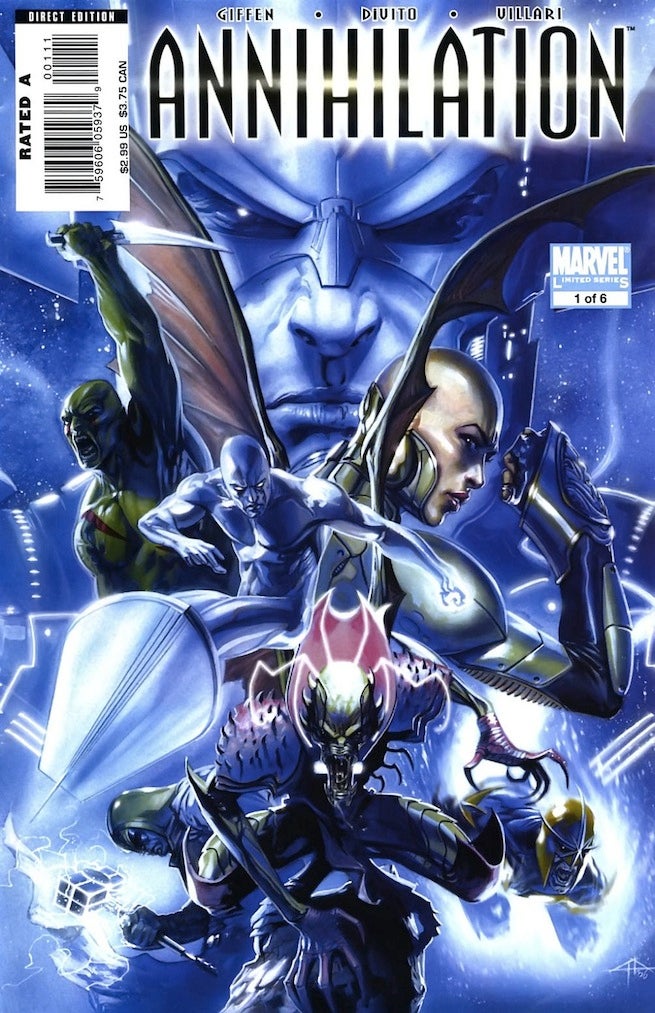 This 2006 event essentially resurrected Marvel's Cosmic-verse and popularized (or re-popularized) a number of characters such as Thanos, Peter "Star-Lord" Quill, Richard "Nova" Rider and Drax the Destroyer, that are now key parts of the modern Marvel Universe (and its associated cinematic world).

In this storyline, the fate of the entire universe is threatened by the supervillain Annihilus, who plans to release one of his patented "Annihilation Waves" – a large armada of warships that destroys everything in its path. Rider forms a ragtag army, which includes Quill, Drax and Gamora, to fight the wave while Thanos aligns himself with Annihilus out of morbid curiosity and plans to betray him later (only to get his heart ripped out by Drax – no, that's not a euphemism, Drax seriously punches a hole through Thanos's chest and rips out his heart).

Despite Drax's screw-up, the heroes do prevail and the galaxy is saved. More importantly, the storyline begat Annihilation: Conquest, which in turn, with the addition of a talking raccoon and tree, led to the formation of the new Guardians of the Galaxy. The rest, as they say, is history. 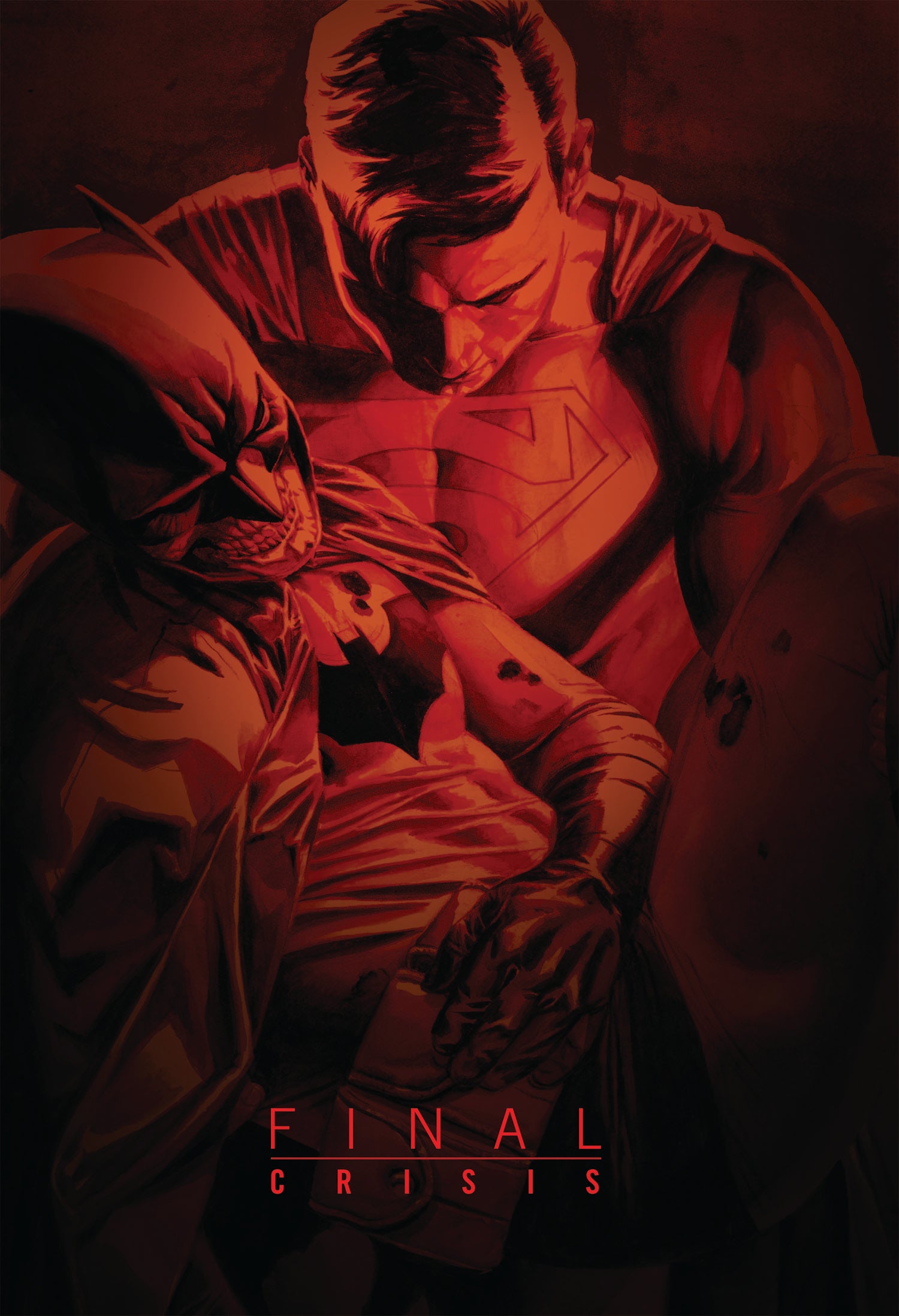 Grant Morrison's highly complex (some might even say convoluted) 2008 miniseries follows the avatar of evil, Darkseid's attempts to sunder reality. Morrison weaves together a number of timelines that depict the ends (and in some cases, returns) of various key DC characters. Both Martian Manhunter and Batman appear to die during the event while the Silver Age Flash, Barry Allen, returns via the Speed Force after being dead for more than 20 years.

After Darkseid is eventually killed by Superman, the true force behind the "Crisis" is revealed to be Mandrakk, a Dark Monitor who wants to end all of reality and consume whatever remains. Against all odds, Superman recruits an army of other Supermen from across the Multiverse (including one that looks like U.S. President Barack Obama) and together they save the world from certain destruction. 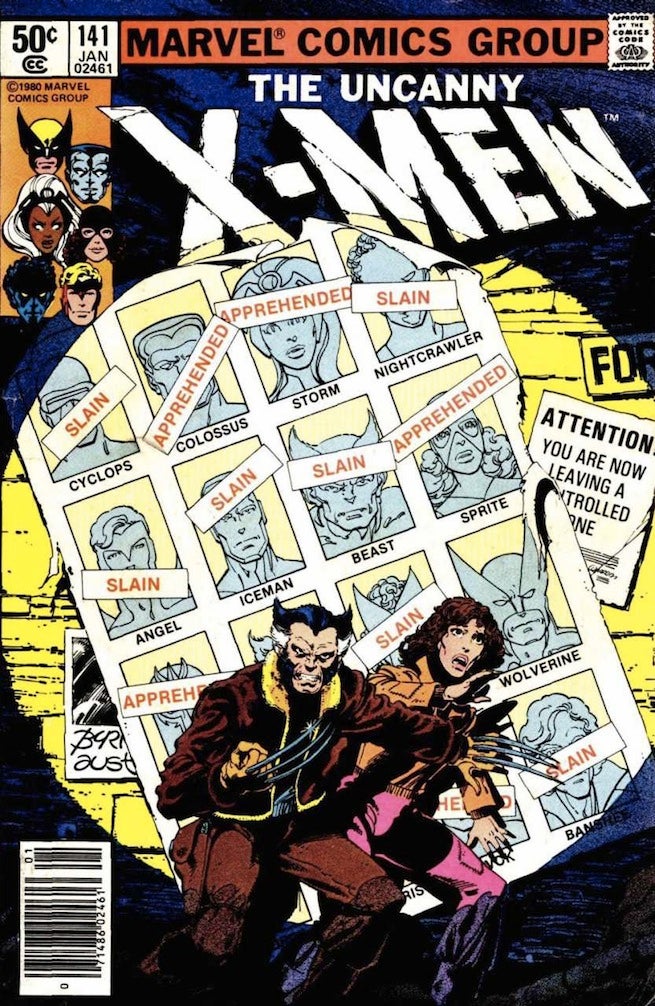 This landmark X-Men storyline from the iconic Chris Claremont/John Byrne creative tandem takes place in a dystopian future where mutants have either been exterminated or imprisoned and the monstrous robotic Sentinels rule. As this dark world stands on the brink of nuclear holocaust, the surviving X-Men decide to send Kitty Pryde back in time to prevent the assassination of an American senator – an event they believe triggered the dystopia.

"Days of Future Past" has proven to be a highly influential storyline, inspiring a number of other dark future/doomsday storylines (including a number of famous X-Men arcs). The popularity and uniqueness of the story helped transform the X-Men into one of Marvel's biggest properties (arguably its biggest property throughout the 80s and 90s). It was also recently adapted for last summer's X-Men: Days of Future Past film which saw Wolverine go back in time (rather than Kitty) to prevent an event that would have led to a doomsday scenario for the world. 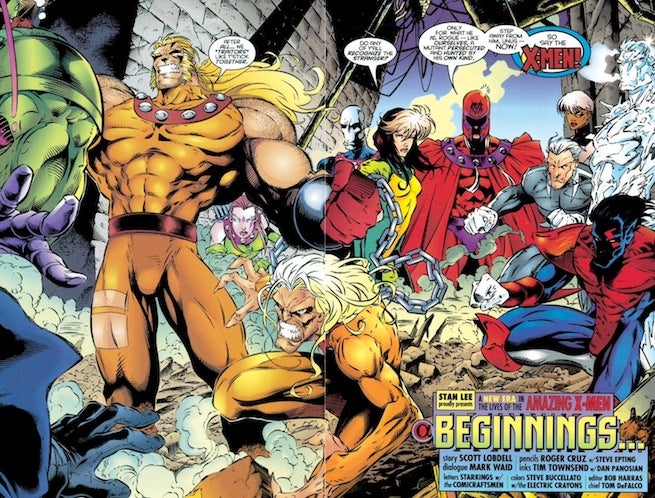 Speaking of X-Men stories that were inspired by "Days of Future Past," Marvel threw many of its fanatical X-book fans for a loop in 1995 when it rebooted all of its series mid-storyline and placed these characters in an alternative timeline dubbed the "Age of Apocalypse." In this timeline, Magneto is the leader of the X-Men who vows to carry on the dream of his former adversary Charles Xavier (who died trying to protect Magneto). Meanwhile, the unstoppable mutant Apocalypse has made a move to conquer Earth, first taking North America and ordering the genocide of anyone who opposes him.

This dramatic shift in the timeline has major repercussions throughout this alternative universe, and it eventually becomes clear that this dark world is going to violently end. Magneto succeeds in killing Apocalypse moments before a nuclear bomb wipes them all out. Fortunately, the time-traveling Bishop succeeds in going back to the past to prevent Xavier's assassination, thereby erasing the "Age of Apocalypse" timeline from existence and restoring the standard Earth-616 universe. 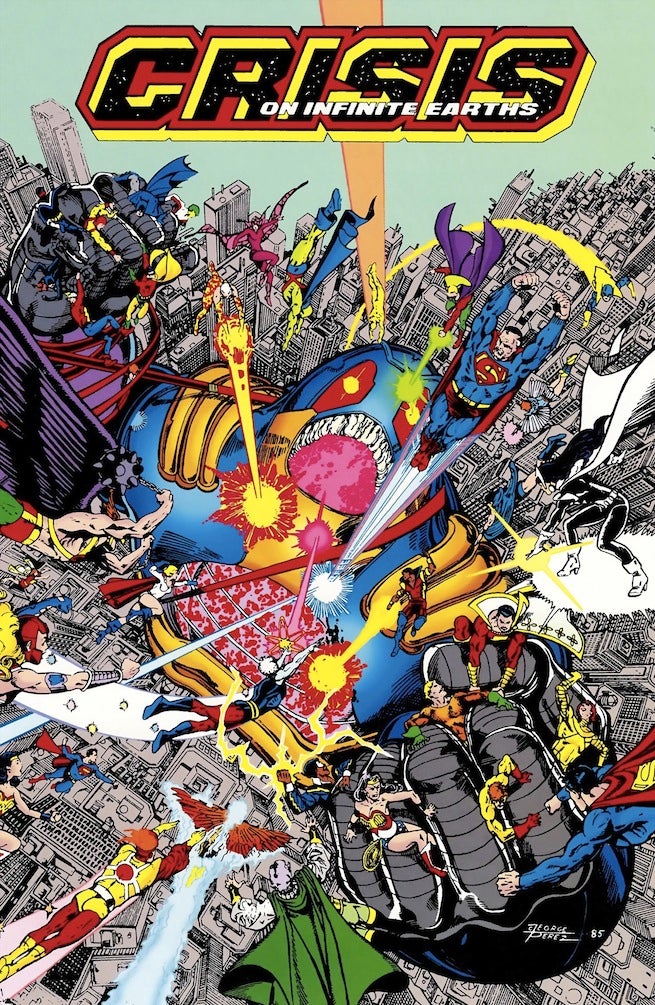 2. Crisis on the Infinite Earths

The big bang for DC events, this 1985 miniseries from Marv Wolfman and George Perez introduces the cosmic behemoth known as the Anti-Monitor, who is wiping out all of the parallel worlds of DC's Multiverse, setting up the ultimate crisis for the surviving heroes on Earth-1. Even Superman is powerless to stop the Anti-Monitor, who kills the Man of Steel's cousin, Kara-El, in battle in Crisis on the Infinite Earths #7.

However, the Multiverse is saved from doomsday thanks to the efforts of Barry Allen, aka, the Flash, who uses his super speed to create a vortex around the Anti-Monitor's anti-matter canon, destroying the devices (and killing himself in the process).

Most folks consider Crisis the primary inspiration for end of the world comic book storylines. The main purpose of the event was to actually trim down and streamline DC's cumbersome Multiverse, which featured a number of character inconsistencies. With Earth-1 saved but the bulk of the Multiverse consumed by the Anti-Monitor, DC went on to reboot a number of its most popular titles like Superman and Wonder Woman in its wake. However, there is one more comic book storyline that did doomsday great and technically did it first …

The three-part arc introduces readers to the enigmatic Silver Surfer and the god-like Galactus – a being that gets sustenance from the elemental life force of a planet (or more colloquially, he eats planets). When Galactus discovers Earth, he gets his fork and bib ready. With humanity facing extinction, it's up to the ingenuity of the Fantastic Four to somehow find a way to stop an otherwise unstoppable force of nature.

The second part of this storyline is actually entitled "If This Be Doomsday," a not so overt reference to the trouble the Earth is in thanks to Galactus. However, the Fantastic Four (with an assist from the Watcher and the Surfer) are able to acquire a powerful device known as the Ultimate Nullifier from the Negative Zone. By threatening to use this weapon against Galactus, the world-eater decides that Earth is not worth his time and effort and goes back to the cosmic spaceways.

End of the World As We Know It: 7 Notable Comic Book Doomsday Stories