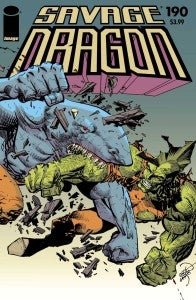 Let's be honest: Not many guys, twenty years into what's considered a fairly mainstream superhero book, still experiment as much as Erik Larsen does on Savage Dragon.

The Image Comics co-founder's latest issue was released in two formats: the standard comic book size and a digest-sized version that required Larsen to draw pages in such a way that they could be cut up and reassembled to accommodate either version.

Even notwithstanding the fact that he’s been experimenting quite a bit with layouts, colors and the like in recent issues of the comic, this isn’t the first time he’s played with the format.

He also wrote, “A similar kind of experiment went on with #64. Many of the pages were designed so panels could be rearranged to run as a strip in Comic Shop News," Larsen said on Facebook recently.

You can check out a piece we ran on his process of designing and laying out the digest pages here.

Series editor Gavin Higginbotham and Erik Larsen sat down for a chat about the current issue--and I...well...wrote this introduction.

Please bear in mind this is a spoiler-filled interview and that you should really go buy the issue first.

Gavin Higginbotham: Osgood is stepping in to Urass's shoes with this issue. Was this always the plan or was Urass still intended to be the Dread Knight in SD 191 when you originally drew the cover?

Higginbotham:  Dragon seems to be upset that Angel hasn't stopped by. Is he feeling rejected by his daughter?

Larsen: More neglected than rejected. Angel is young and involved and kids who are actively involved can get so absorbed that they lose track of time. I don't think that Angel is purposefully staying away from her father so much as she is involved with other stuff. I have a son who is in college now and during the school year we didn't hear from him for months on end and it wasn't because he suddenly hated us--he was just busy and engaged in other things. Time doesn't pass as quickly for Dragon because he's in prison.

Higginbotham:  Animal CAN talk! I always assumed he was mute as Bloop always did the talking (unless being mute was side effect of Animal's mutation).

Larsen: It was a side effect of the mutation. Another incentive to go for the cure on Bloop's part. He has his brother back.

Higginbotham:  It seems the Wilson family are getting a happy conclusion to their story. Most of your villains don't get this kind of treatment. Did these guys get a more pleasant end out of some sentimental attachment as they're childhood creations? Or just felt the need to balance it up a bit after slaughtering most of your villains?

Larsen: I don't think every villains story needs to end in death or dismemberment. I just wanted to see a happy ending with somebody. And these guys seemed like a good choice. Plus, if I ever need them, Angel now has relatives.

Higginbotham:  Was Malcolm's awkward meeting of Maxine's parents inspired by your own past experiences with meeting a girlfriend's family?

Larsen: Kind of. Maxine's dad is visually reminiscent of my wife's father. Maxine is quite a bit younger than my wife was when I met her so her parents are quite a bit younger as well. That, and her parents are both American-born Chinese whereas my wife's parents both came from China. Because of that, there isn't the language barrier that there was with me and my wife's parents. My wife's mother, to this day, speaks very broken English. Maxine's parents are fairly traditional however and, like most parents, they want what's best for their daughter.

Higginbotham:  The Church of Savage Dragon seems to be struggling, or at least its founder is. Are they losing their faith in Dragon already?

Larsen: I think it's more of a matter of them losing faith in the system. Dragon killing Urass certainly isn't helping matters. If Dragon is essentially giving up and not caring about the consequences of his actions it would be difficult, I would imagine, to be able to keep one's spirits up as a supporter. He's making things increasingly difficult.

Higginbotham:  Dart has really kicked up her mission a notch! Twelve victims in one page! Has Firepower got a chance against this rival?

Higginbotham:  The fight with Mako was BRUTAL! Mako has been around since the very start of this series and he's still an absolute monster. This is first real victory over Dragon, correct? They usually fight to a draw or get interrupted by outside interference. This is a big deal.

Larsen: It's true. Their battles have frequently come to an inconclusive end. I think, as they say in sports, Mako "wanted it more." This prison stay is really taking its toll on Dragon. He's aged a lot in just a short while and I think in many ways he feels as though there's no point in it all. I don't know that I'd go is far as to say he's lost the will to live--but he's definitely lost much of will to fight.

Higginbotham:  Whoa! That's one badass looking dude on the final page there. Are the chances good this guy could be a major player? Visuals alone suggests he could be...

Larsen: Only time will tell. At this point he's too remote to be very involved in anything without a search.

Higginbotham:  Beyond the story in this issue, there's also a very unique format being used. The same panels being used to create very different formats. Is this the first time this has ever been done?

Larsen: As far as I know it is. I've certainly not seen it done before.

Higginbotham:  What were the difficulties you (and your talented backup artists Frank Fosco and Scott James) encountered laying out such a unique experiment?

Larsen: There were but they were surmounted. The biggest for me was to make it possible to have a double-page spread in the digest. Because of the pagination that meant needing a spacer page so that I could get things to line up in the digest. The thing was, I wanted both the regular 32-page comic book and the digest-sized 64-page comic book to have the same exact material. That meant every page needed to become two, including the cover, inside front cover and all other pages. But...mission accomplished. We did it. There were a couple small glitches but nothing too severe.

Higginbotham: And did everything turn out how you wanted it? Will you be tempted to try this again? Or something a bit different at least?

Larsen: In retrospect I think I would have liked to have had it so that the spacer page was not necessary and that every page would be cut in half and put on subsequent pages. Just as a storytelling challenge that would have been fun. But I'm relatively happy with how it turned out. It's doubtful I will attempt something like this again as printing the digest was incredibly expensive and there's a good chance that I'll never break even on it.