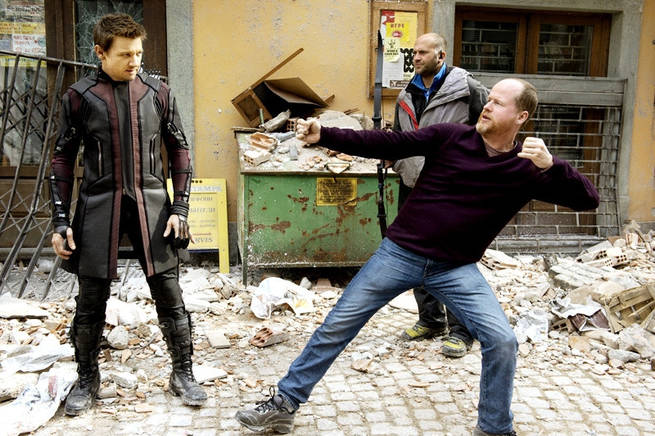 Joss Whedon's second Avengers movie, Age of Ultron, is now in cinemas across most of the world and stacking up vast piles of just about every currency you can imagine. I should think that many people reading this will have seen the film already - we are the ones that midnight screenings are made for - or, at the very least, will be checking it out this weekend. We've been waiting long enough, thank you.

The journey has been even longer for Joss Whedon, who was deep into writing this film before it was officially announced. Indeed some of the ideas in Age of Ultron date back to the very beginnings of his work with Marvel.

I spoke to Whedon at the end of the road, just hours before he completed his press duties and set off for a well-deserved break. We chatted about his ambitions for the picture, his insight into these characters, and his creative processes.

What was important for you going into this new film?

Joss: It was a huge deal for me, very important, to do something that we had never done, in the MCU, and take a trip inside and see what makes these guys tick and what makes them - well, fail to tick. You know, in every case it really has to do with fear of impotence and isolation and helplessness. These are very lonely people.

That’s the thing they all share on one level or another. I mean, Tony Stark could do anything, and he built himself a suit of armour. Thor’s on the wrong planet, Cap’s in the wrong decade, Natasha was designed never to get close to anyone and Bruce has a problem. And Hawkeye has a dark secret that makes him removed from the rest of the group. Finding out what that is is the fulcrum of the movie. It says "Here’s the thing about humanity. You have to be a part of it, you cant just save other people."

I shot this film very differently than I ever have before, except maybe on Much Ado. We ran three cameras most of the time, and Ben encouraged it and was able to light for it. While the first one was very deliberate, and my usual camera style is very deliberate – a shot exists for this reason and goes to here, and then we pick up this other one – this time I wanted to do something that felt a little more, as I joked, like a documentary about The Avengers. It's a little more lived in, and rather than looking at them, we're looking over their shoulders, and so I ran a bunch of cameras.

At the same time, I'd get in the editing room and thought “I remember when I used to make decisions.” I couldn't tell if I'd made artistically a step forward or a giant step back.

What helped you during the edit to know you were getting it right?

I would feel it. You can't really describe this, I think. Some people can, but for me, I just go in and kind of just know what I want. Running all of these cameras I'd get what I want and then the 'strange' version of it as well. There are certain things I love, and I like to frame things oddly, but the hardest thing about this film was, because some of the characters were CG, there wasn't a chance to say “Let's take the framing vernacular we actually used on the people who were there on the day and apply that to these CG characters.” It gets a little staid sometimes when you're on them.

You've inherited a lot of design elements from the other films and the original comic books. Do you feel restricted by any of that?

I worked with the visual development guys, who are brilliant, on everything. Marvel likes to change things up even more than I do. I could say “That works” and they'll say “No! It has to be different, it's a new movie!” so we're always adding an element to the designs, reaching into every department. At the same time, it's nice to have a lot of decisions already made so you can work on things like, you know, the story.

Marvel's Phase 2 wraps up with Ant-Man in June, but Whedon's next move is so far entirely secret. Right now though, I hope he's got his feet up. He's earned it.

EXCLUSIVE: Joss Whedon Wanted Age Of Ultron To Feel A Little Like A Documentary About The Avengers