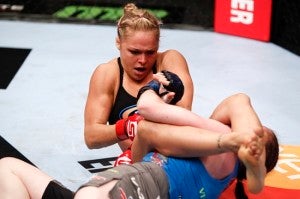 Producer Boaz Davidson, writing on Facebook about his upcoming film The Expendables 3, told fans today that there were seven days left before principal photography begins on the film.

Ortiz and Rousey are professional fighters, with Rousey being the UFC bantamweight champion for women and Ortiz being a former Welterweight boxing champion.

Lutz, for his part, is best known for appearing as Emmett Cullen in The Twilight Saga, one of Lionsgate's other big franchises. He's the youngest face in the crowd, and Rousey being the only woman, so the rumors that the makeup of The Expendables would be shaken up dramatically seem to be just that--rumors. Milla Jovovich, Jackie Chan and Nicolas Cage--all of whom were confirmed at one point to be in contention for a part--are all absent from this list as well.