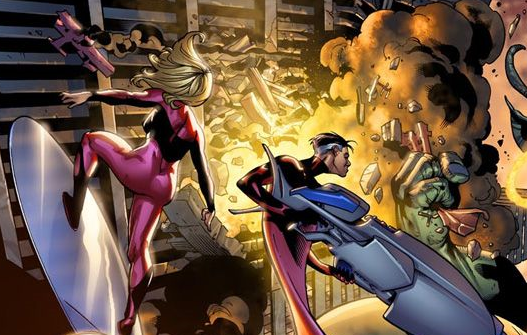 While nearly every Marvel character has had a costume overhaul in the months since the launch of Marvel NOW!, the publisher's "First Family," the Fantastic Four, had been spared that treatment. Up until now. With James Robinson and Leonard Kick relaunching the series with a new #1 and a new direction in February, the long-standing team color scheme is out the window, as blue and white gives way to black and red. 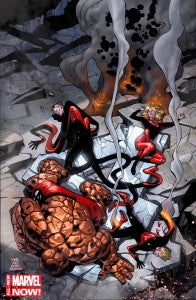 While a red-and-black color scheme was actually teased by the cover released last week, the close-up nature of the character images didn't make clear that the costumes were actually different, rather than reflective of the red background of the cover. This isn't the first time the FF's costumes have been altered, but as far as we can recall, it was almost always a variation on the standard blue and white. A black-and-white version of their costumes was introduced during Jonathan Hickman's run when Human Torch was presumed dead and the team started referring to themselves simply as the "FF"--short for Future Foundation--and remain in use for supporting characters and non-combat situations in the series.

Our old buddy Ben Grimm does point out that at a few points in his history, Johnny Storm has been shown to have a red costume, reminiscent of the Golden Age Human Torch, a character Robinson is writing in All-New Invaders. Most recently (unless we're forgetting something), he wore red in Fantastic Four: The End. Arguably the most memorable redesign of the team, though, was when the Fantastic Four briefly included none of its regular members and didn't wear uniforms. For a brief story in 1990, the team was comprised of The Hulk, Spider-Man, Wolverine and Ghost Rider. Those characters all wore their then-standard superhero costumes, rather than suiting up for FF duty. Robinson and Kirk's Fantastic Four kicks off in February.

Fantastic Four Get a Costume Redesign in New #1

Pokemon Home's 2.0 Update Has a Cool Easter Egg for Diamond and Pearl Players

The CW President Promises Legacies Will Have a "Proper" Series Finale