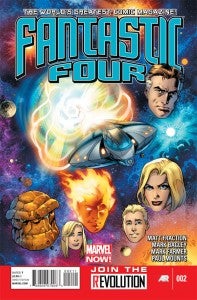 As part of their regular series of video interviews on the Marvel NOW! relaunch, MTV Geek spoke with Matt Fraction this week, discussing his Fantastic Four and FF titles with him.

Two of the best-reviewed new titles of Marvel NOW!, Fraction's Fantastic Four and FF, along with Hawkeye, have taken him from a fan-favorite writer to one of the most significant talents currently working at a major publisher.

Taking over from his fellow Avengers vs. X-Men writer Jonathan Hickman on both Fantastic Four and FF, he's also got awful big shoes to fill.

Check out his thoughts on the launch below.