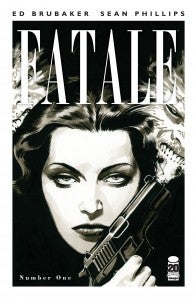 Now this is news we can get behind: 'Fatale,' a new Image Comics series, sold out a 'generous overprinting' for its first issue. A second printing is underway and will be on shelves with the second issue next month.

"The overwhelming positive response to FATALE from retailers and fans has been a bit shocking, but a great way to start the new year," said writer Ed Brubaker. "Keep it up, and we'll keep putting out the best book we can."

Written by Brubaker and drawn by Sean Phillips 'Fatale' combines two genres--horror and noir--to tell the story of a reporter in 2012 who stumbles on a secret that leads him to an interesting, and dangerous, set of characters. There's Josephine, a seductive woman who has been on the run since 1935, and a mobster who just happens to be a demon monster. Along the way is a path of people who have been caught in between the two.

To say the folks at Image are delighted would be an understatement. "2012 is the year of the creator, and we couldn't imagine a more suitable way of kicking off our 20th anniversary than with this brilliant new series," said Image Comics Publisher Eric Stephenson. "Ed and Sean are two of comics' absolute best, and FATALE is their best work yet.

You might be able to catch 'Fatale' #1 in stores before it runs out. 'Fatale' #2 hits shelves February 1st.