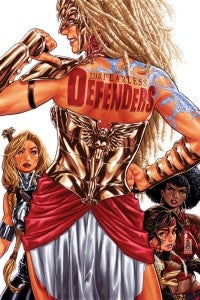 When ComicBook.com spoke to Venom and Fear Itself: The Fearless writer Cullen Bunn about his forthcoming Marvel NOW! launch, Fearless Defenders, the writer told us that while Valkyrie, Misty Knight and Dani Moonstar are going to be the series leads when the title launches, "each bringing something different to the table. But… and this may be a good thing or a bad thing… I’ve introduced a new character in the first arc who might just steal the show."

That new character, it seems, has been revealed via a teaser image posted at Newsarama and now identified at Bunn's Fearless Defenders Tumblr.

"Your newest Fearless Defender!" He blogged. "Her name is Hippolyta."

The image posted, shown at right, is apparently the cover to The Fearless Defenders #3. There's also a variant cover by artist Phil Jiminez, seen below. 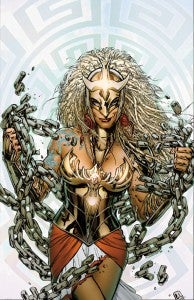 With Red She-Hulk not long for the team, it seems this warrior woman is being brought in to provide some of the muscle that the Defenders will be losing once the first arc is through. It may not help, as Bunn told us that Valkyrie and company are actually squaring off against a foe who is very good at manipulating their particular weaknesses, even in spite of having no actual powers.

Hippolyta, in Greek mythology, is the queen of the Amazons who possesses a magical girdle that serves, essentially, as a crown; it's her indicator of that birthright. It seems as though that's the golden thing we see with the eagle.

In DC Comics continuity, Hippolyta is the mother of Wonder Woman and, in the pre-Flashpoint universe, actually served as the first Wonder Woman during World War II. She's one of a number of mythological figures, including Hercules, Zeus and Thor, who have appeared in the comics universes of multiple publishers, as a result of being a public domain character.