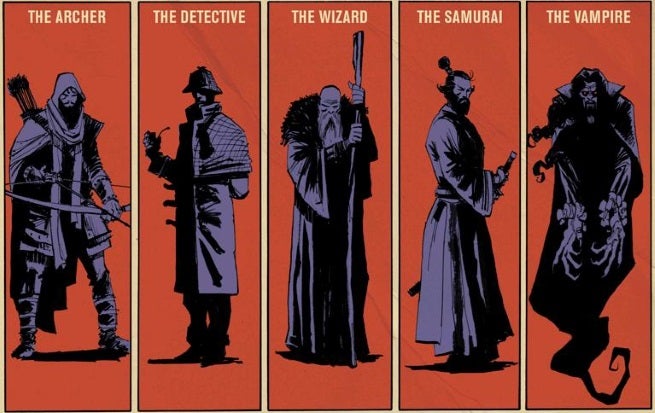 Syfy has put a television adaption of Frank J. Barbiere and Chris Mooneyham’s Image Comics series Five Ghosts into development. The pilot is being written by Evan Daugherty (Snow White And The Huntsman, Divergent, TMNT).

Fives Ghosts is about a 1930s era treasure hunter possessed by five literary ghosts - Merlin, Robin Hood, Sherlock Holmes, Musashi, and Dracula – and who can draw their unique abilities during his adventures.

“Matt Pizzolo has been a close friend and sounding board to me for a long while, so I’m thrilled to have Matt and Black Mask on board as producers for Five Ghosts,” said Barbiere. “Matt and Black Mask are constant advocates for the material and have helped us every step of the way while bringing Five Ghosts to the small screen.”

Barbiere continued: “Beyond television, we’re extremely thrilled to be working with Black Mask in developing exciting new media content for Five Ghosts. Black Mask is helping us bring a direct adaptation of the source material to new media and it’s amazing to be able to have actual artwork and assets from the comic be brought to new audiences.”

Five Ghosts began life as a Kickstarter campaign in 2012 and was previewed at San Diego Comic Con that year, where Barbiere shared a table with Pizzolo. Five Ghosts was picked up by Image Comics and premiered at Emerald City Comic.

Pizzolo said: “Frank and Chris have really crafted something unique here, a non-stop action thrill ride with a smart, sophisticated literary sensibility. It’s really a pleasure to get to work with them on expanding the Five Ghosts world.”