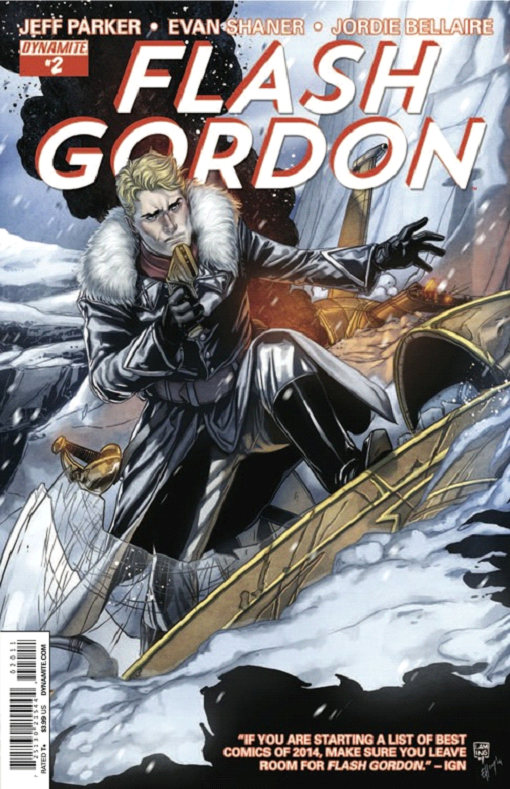 You know, it's refreshing to read a comic that feels like it could have been written specifically for you. What I mean by that is that this book has a number of things going for it that make it a series that really appeals me. First, it's a revival of an older property that, while I never really got into previously, I have been aware of for my entire life and have had at least a passing interest in. Second, it's got a creative team (Jeff Parker of Batman '66 writing and Evan "Doc" Shaner of the "Only Child" issue(s) of The Adventures of Superman on art duties) that I love. And third, it employs a design aesthetic that is charmingly retro. I'm the kind of guy who appreciates good, honest fun and has an affection for the pop culture and design choices of ages past. This book has all of that in spades. It's a largely well-written series with beautiful artwork bolstered by excellent color work from Jordie Bellaire of Pretty Deadly and a slew of other titles. This issue even starts to address the major problem that I had with the first issue. Having said that, let's jump into the breakdown… SPOILERS!!! 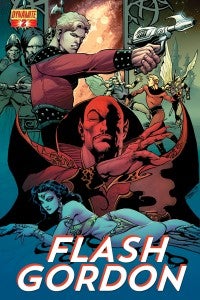 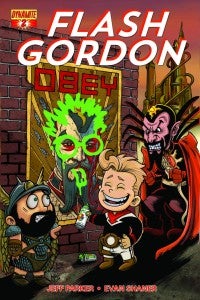 The Bad: Of course, into each life some rain must fall and I cannot call this issue an unmitigated success. Oddly, the weak point of this series so far appears to be Flash Gordon himself. Aside from "thrill-seeker," I would be hard pressed to define his character. So far, all the series has established is that he is in fact a thrill-seeking son of a wealthy somebody who can fly a jet plane and doesn't really think much before jumping into action. That's enough to characterize a cardboard-cutout adventurer stereotype but compared to the feisty and intelligent Dale Arden and Zarkov's boozy, smooth-talking genius Flash just feels like a bit of a cipher. I mentioned earlier that I love the expressions that Doc is crafting for Flash but right now all I'm getting is a sense that this is a man ruled by his emotions. He leaps without thinking into an alien sport he knows nothing about because it looks like fun, he unthinkingly fires an arrow into exploding fruit he knows nothing about and causes an explosion that could conceivably have killed or injured him, and then he just decides to try stopping the "beast man conversion" process in the Forge without a plan or seemingly a single rational thought in his head. I applaud his desire to halt injustice and cruelty but what does he think he's going to accomplish by jumping into action in the middle of what amounts to a city full of mechanized minions of Ming? Oddly enough, I'm reminded of the Hulk more than almost any other character at this point. Just point your hero in front of the problem and hope he smashes it. It's still early in this series and this Flash seems to be new to the hero-ing business so I'm willing to cut it some slack but it would be nice to see a more fleshed-out Flash in the very near future. So far, he hasn't had enough to say or do that really gives me insight into who he is as a person. On the art front, there are two relatively minor issues that I want to mention. First, when Flash jumps into the Arborian bug-sport, there is a shot of Flash landing on one of the "pulpers" that is inset into a panel of Barin, Dale, and Zarkov watching the action. I can see what Doc was trying to do but this really didn't work for me. Perhaps it is because the group is looking away from the inset, but the intent here is not clear enough. Also, I can't quite explain why but on the two-page spread where the "beast man conversion" process is depicted, the reading order is unclear for me. For some reason, I want to read the left page and then the right page rather than reading page to page in three horizontal rows as was intended. This may be because there is no image or panel that strongly straddles the two pages and unites them into single unified layout. The Questionable: Where we talk about things that are neither good nor necessarily bad, but at least are a little head-scratching. So, we've got three distinct covers and none of them has anything to do with the content of this issue. Why is that? I mean, none of the covers are what I'd call bad and the 80th Anniversary and "Li'l Flash" covers are serving distinct purposes. However, what's up with the main cover showing Flash in what appears to be the frozen land of Frigia when this entire issue takes place in the wooded Arboria? This isn't a problem unique to this book or series as many comics seem to have covers only tangentially related to their content but that won't stop me from complaining about this here. Shouldn't covers tease the content? Shouldn't they reflect what's happening inside in order to get me to want to purchase the book? This seems so self-evident that I wonder why this is a conversation that needs to be had and why comics mess this up so often. Finally, this book still has the T+ rating on it. Why? There is nothing, absolutely nothing in the content that would justify this rating. I'm going to go out on a limb here and suggest once again that it has to do with the advertising that Dynamite has included in this issue. The reader is once again treated to a Vampirella ad showing a decent amount of skin, there is a Lady Zorro advertisement where she's suggestively treated but mostly covered up, and some images from The Blood Queen with more exposed cleavage are included but are mercifully small. The thing that really gets my goat and likely contributed to the rating though is the back cover. It's advertising a series called Chastity and features a scantily clad vampiric goth woman licking blood off of a knife… You stay classy, Dymanite! Honestly, if it's the advertising that's resulting in the rating, then it needs to be excised and replaced with anything else. This rating is entirely inappropriate for the content of this book and it's unfairly limiting the series' potential audience. This is frustrating in the extreme and annoys the heck out of me as it should be annoying the creative team. In Conclusion: I highly recommend this book. It's stunningly beautiful and fun. The quibbles I have are relatively minor and I hope to see Flash develop more as the series progresses. I know that I'm definitely looking forward to future issues.

Evil Renewed for Season 4 at Paramount+