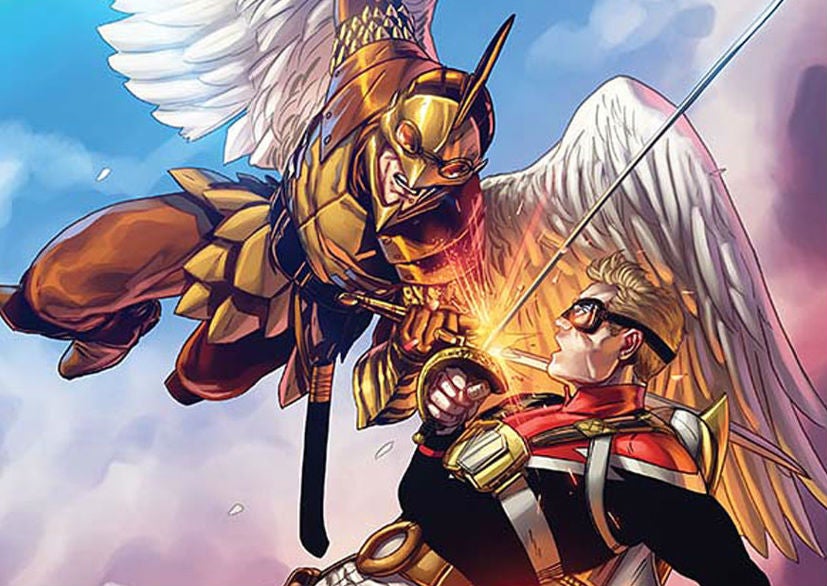 Now we're getting somewhere! This might just be the issue of this series where everything finally truly gels for me.

Unlike past issues that I've generally really liked and praised pretty thoroughly but had a few niggling problems, this one works like gangbusters and contains a little of everything a reader could want. You want fun? It's got fun. You want action? There's plenty of that. Want pithy dialogue? They've got a sale on that actually. Character development? Shipment came in just yesterday as a matter of fact. Brilliant visuals? Coming out this issue's ears!

Written by Jeff Parker with art by Evan "Doc" Shaner and colors by Jordie Bellaire, this iteration of Flash Gordon is quickly becoming a personal favorite. Want to know why? Let's jump into the breakdown and mind the… SPOILERS!!! 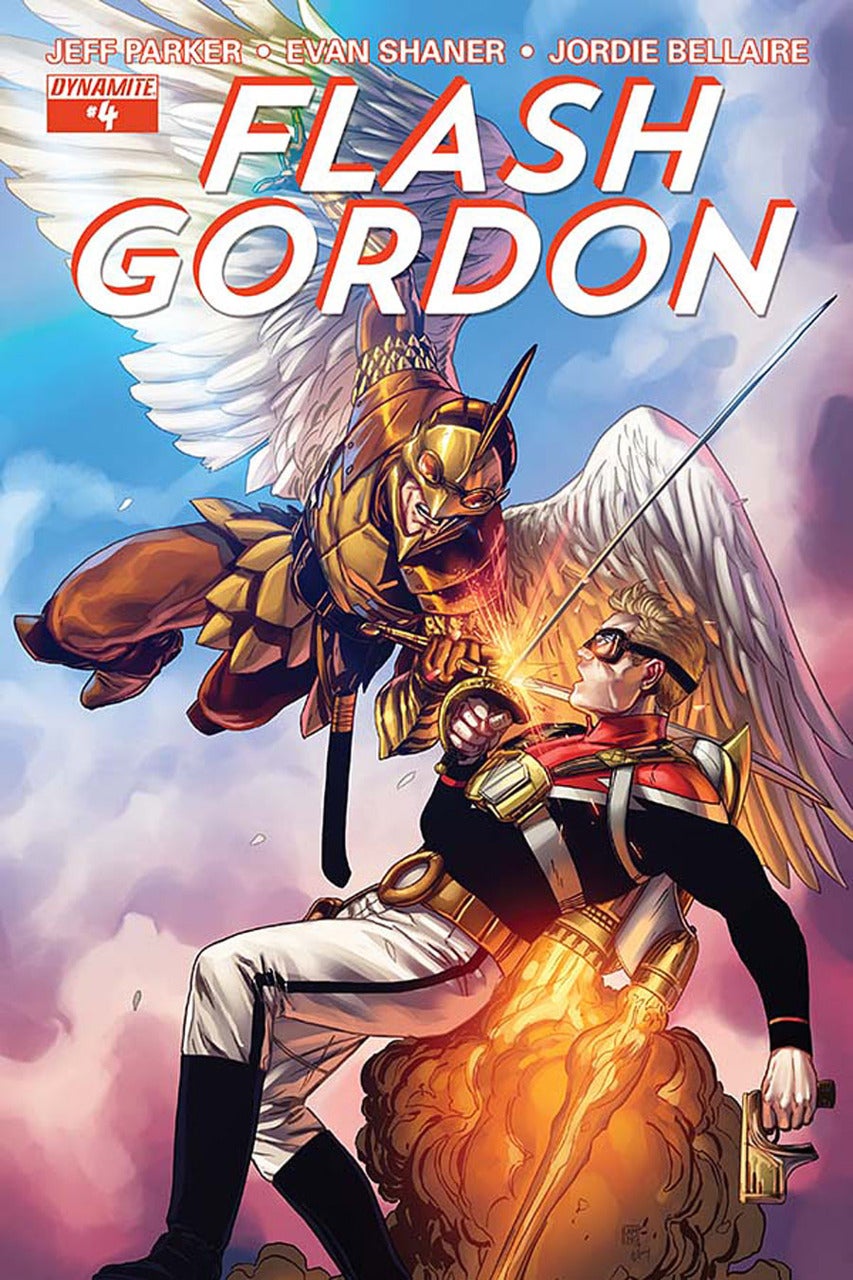 Every issue I spend a good chunk of the review praising the visuals and this one is no exception. Page after page, this series has been nothing but stunning art. Doc Shaner always brings a classic style and slightly retro charm with absolute polish and panache. Once again, he steps up to the plate with wonderfully expressive faces, beautifully rendered scenes, inspired design, and a brilliant eye for panel layouts. You honestly get the sense that he's thoroughly enjoying working on this book and it really comes through in what makes it onto the page. As always, I appreciate the homespun feel of his panel borders, his crafting of sound effects, and his creature design.

Particular moments that really worked for me include Flash's wonderful surprised face when Prince Barin's message-bearing arrow lands right in front of him, the fairly detailed close-up of Ming's pet owl/tiger hybrid, the panel of Dron's announcement to his subordinates, and the flashback scenes which are spectacularly designed with their look tying into the nature of what is being described. I would also be remiss if I didn't mention the extras at the end of this issue. We get to see Doc's character sheets for Flash, Dale, Zarkov, Thun, and Mox (the heretofore unnamed Rhino-man).

Readers are also treated to Doc's design for Vultan who it seems will be appearing next issue. Who is Vultan? Remember the big bird-winged warrior played by Brian Blessed in the 1980 Flash Gordon flick? That guy. He's even shouting "Dive!" in the character sheet!

I just have to say that I love the design on this character which seems to borrow elements from past depictions of the character while looking fairly unique. The one bit which caught my eye and really shows the time and detail that Doc is putting into this are actually Vultan's eyes. Doc has deliberately given this character large black pupils and bright yellow-orange irises that between the two take up the entirety of his visible eyeballs. What does this mean? It means that Doc thought in sufficient detail to give this bird-man character eyes which precisely resemble those of an owl or hawk. Cool, right?

Anyway, Jordie Bellaire once again contributes beautiful colors to all of Doc's work. Her work in the monochrome flashback sequences is perhaps particularly noteworthy as it remains beautiful and visually interesting with a very limited palette. Overall though, her work is gorgeous with subtle shading and a lovely texture that she brings to everything. None of her colors are simply flat and the care and detail which she brings to this series is very much appreciated.

The standout for praise this issue though is Jeff Parker's writing. I've been a bit hard on him at times but in this issue, he gives everything a reader could want. Everything is beautifully written with a very much appreciated lightheartedness. As I said earlier, this issue truly does have a bit of everything. There are plenty of jokes and comedic moments, often deriving from the actions and/or comments of Flash and Zarkov, which all work to put a smile on one's face. Individual characters are all written very well with respect to their personalities and Ming in particular is always fun with just how much he revels in his own mercilessness. Additionally, there is plenty of action and the story is advanced significantly.

One complaint that I've had since issue one is the lack of backstory or a flashback that establishes the universe in which these characters operate. Issue one jumped straight into the action and never looked back. Happily though, four pages are devoted here to establishing Ming and his interplanetary conquests, the nature of interplanetary travel, and the events of the miniseries Kings Watch which immediately preceded this series and explained how Flash got into the anti-Ming heroics business. While part of me still feels like we could have gotten some of this earlier, this reveal comes very organically here as Dale explains their situation to Prince Barin. This is a lovely reward to readers who have been enjoying the series thus far and read in trade form this should function perfectly as part of a first volume.

Another complaint I've made is that I haven't really gotten a sense of Flash's character and some of the messages I have received have been mixed. Here though I feel that I'm getting a better picture of Flash.

Part of it is that his actions here are coherent and present him as a competent adventurer without some of the slightly obnoxious remarks he's made previously. Another positive is the one-panel flashback to Flash interacting with and receiving advice from his father. It's a nice touch and helps to flesh out the kind of man Flash is and how he became that way. The larger flashback also helps to give a sense of his character, selflessness, and headstrong nature. Finally, there's something about the earnest way in which he faces the future at the end of this issue that helps to bring across a kind of thoughtfulness that is very welcome. I'm looking forward to even more character building over future issues. 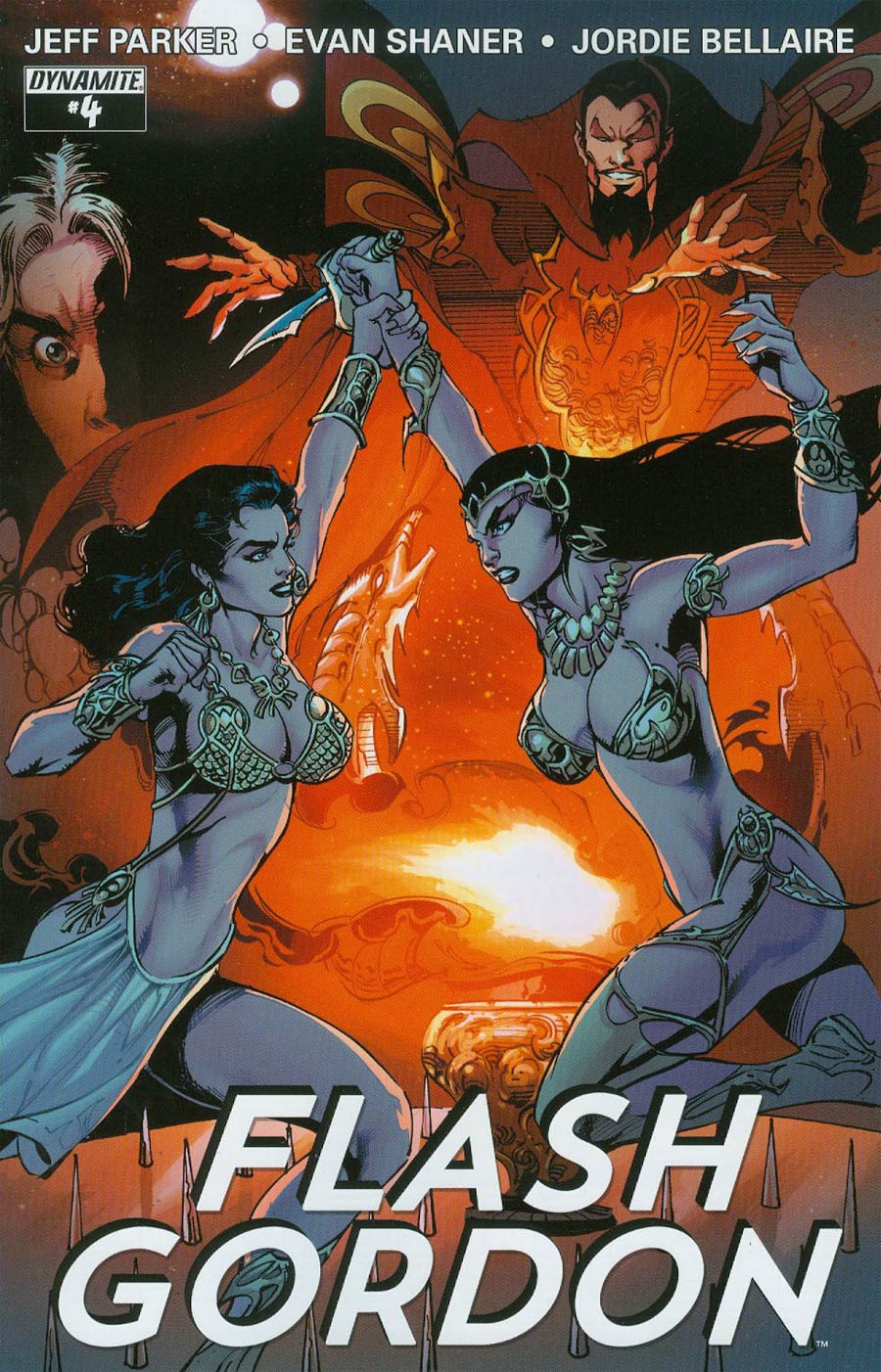 I can honestly say that I've got nothing to say here for this issue.

I could be churlish and complain about Flash sleeping through the flashbacks and thus potential character development by engaging in the recounting of his past with Dale… But I'm not going to do that. Like I said, I really appreciated the handling of Flash in this issue regardless of his narcoleptic tendencies.

What I am going to be churlish about is the continued T+ rating on this comic. If it isn't resulting from publisher Dynamite's often breast-based advertising, then it might be the result of Roberto Castro's "80th Anniversary Cover" for this issue which features two unidentified (is one supposed to be Dale?) and scantily-clad women fighting. It doesn't scream "anniversary" to me as much as it does "male gaze." For a series which in its actual content is excellent fun for any age to be labeled T+ is a darned shame. I'll just keep beating this dead horse for as long as the rating continues without actually narrative content to justify it.

Read this book! Read it now. No, don't keep reading the review, go out and pick up a copy…

You're still reading aren't you? Okay, this comic is expertly written by Jeff Parker with loads of fun and adventure. The visuals from Doc Shaner and Jordie Bellaire are stunning and perfectly complement the story. It's an excellent series which only seems to be improving as it continues. That's it, the review is over. Now get on over to your local comic shop.