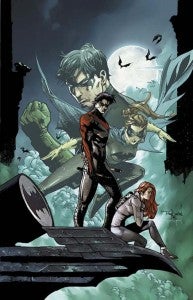 Warning: There are spoilers ahead for Forever Evil #1, out in stores today.

Nightwing has had an interesting few years; after DC Comics co-publisher Dan DiDio reportedly tried to have him killed during Geoff Johns's big Infinite Crisis finale, the original Robin briefly took up the mantle of Batman when Bruce Wayne was presumed dead following the events of Final Crisis.

While it seems that chunk of time still "counts" for the New 52, he returned to his Nightwing mask by the time the relaunch began in 2011.

Well, that mask has been pulled away, as the first issue of DC's Forever Evil crossover, out now, reveals Dick Grayson's identity to the world. As we saw in the preview pages released earlier this week, Johns and Finch's story included Nightwing being snatched up by the Crime Syndicate of America--and having his identity revealed to the world via live television. The CSA also say that they plan to stalk and kill all of Grayson's loved ones, which makes the trajectory of the rest of the miniseries--especially as far as it applies to the Bat-family--pretty clear.

And, of course, it begs the question: who the heck is that Batman working with Luthor's people on the cover of the series' second issue? Could it be that Bruce Wayne really is working with Lex and company once he and the rest of the League return next month?

And now, more than ever, it appears as though his life as Dick Grayson will be a part not only of the book but of the DC Universe in general.

What the ramifications of this are for the Batman family of characters will be interesting; since Bruce Wayne has already admitted to being a benefactor for Batman, Incorporated, it probably won't endanger his secret identity at all (this could just be an extension of that relationship, after all)