While certainly not a comprehensive list, here's a look at some of yesterday's Free Comic Book Day releases: 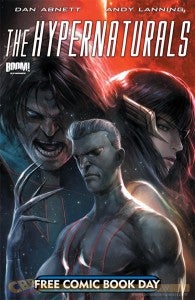 With rumors of a Guardians of the Galaxy movie on the horizon, Dan Abnett and Andy Lanning--the writing team that worked so hard to make it a viable commodity at Marvel--were recently announced as bringing their unique skillset for crafting crowd-pleasing cosmic superhero fare to Boom! Studios with The Hypernaturals. After a quick preview earlier this week, Free Comic Book Day saw the release of a zero issue that tells (part of) the story of how the 21st team of Hypernaturals have disappeared in deep space and need the help of their retired counterparts.

It's a strong story with sharp dialog, and the only qualm I have with the writing is the silly habit they have of sticking a "q" in front of everything. We may find out eventually what the Q is that's so important to the lives of people in the future, but at present it just seems like a gimmick and brings to mind J.T. Krul's lackluster Green Arrow run from earlier this year.

Opening with a fake ad for Gauss Sportswear, the official sportswear of the Hypernaturals, it stikes me immediately that Gauss could be a great viral marketing campaign for the comic.

The fact that it's the 21st iteration of the team should provide for some great backstory, and a ready set of allies and enemies for the team in spite of the fact that we're just now seeing their first stories being told. That will allow the writers to roll right on into the action without worrying about establishing origins; just make the characters accessible and move on.

The art from Tom Derenick could use some finishing work; his inks are muddy and the art suffers from it. Derenick is a very capable draftsman and storyteller, but is probably not the guy you want drawing an establishing scene for a character without a very unique look, which he's asked to do once or twice. He also probably suffers by comparison to Brad Walker, whose work on the issue is stellar. 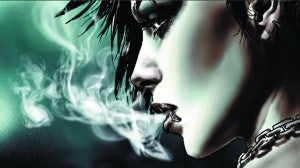 Vertigo's sample chapter for their upcoming Girl With the Dragon Tattoo graphic novelization works better on the page than it does digitally. The chapter is slow-paced and lacking in a big, shocking reveal, so the benefits of digital are largely lost on it and the physical book allows the reader to view it at their own pace. A great choice for Free Comic Book Day, it's a terrific draw for readers new to comics, a well-done comic and something that has sold me on picking it up in hardcover.

Valiant's Free Comic Book Day offering is a sampler platter of sorts, featuring sample pages from X-O Manowar #1 (released last week) and Harbinger (due next month) that fans have already seen. There are also covers and interviews in support of the other Summer of Valiant releases--Bloodshot and Archer & Armstrong--complete with script pages from Bloodshot writer Duane Swierczynski.

The one real weakness of the issue, which is a great jumping-on point for new readers, is its lack of new content for direct market comic book fans. It also would have benefitted from the two-page splash in the center of the book being swapped with the cover. Also seen for the first time in this book are promotional posters for Rai and Eternal Warrior relaunches, neither of which have any creative teams attached to the art yet, although it appears to be David Aja who's drawing Rai. As with most sampler platters, it's not entirely satisfying but it's a good fit for first-time visitors--which is what Free Comic Book Day is supposed to be.