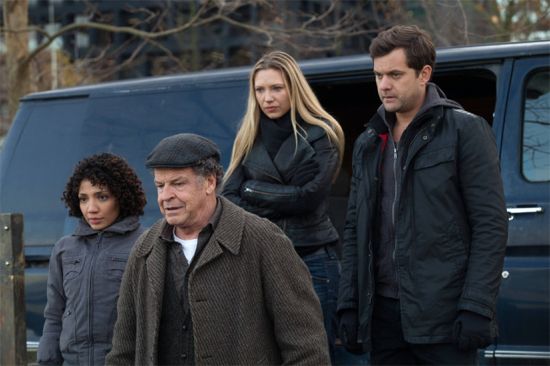 After five season, Fringe comes to an end tonight with a two-hour series finale. The Fringe finale is also the 100th episode of the series. In the Fringe finale, the Fringe team engage in a desperate plan as Olivia embarks on a dangerous and otherworldly journey into the unknown. Then, Peter, Olivia, Walter, Astrid and Broyles face off against the Observers in one final and extraordinary battle for the fate of mankind. Series Co-Creator and Executive Producer J.J. Abrams said, "It has been an absolute honor to have been a part of the weird and wonderful world of FRINGE. I will always owe the cast and crew for pouring their hearts and souls into every dimension of this series. Creating the show with Bob Orci and Alex Kurtzman was a joy, but watching it evolve over the years into such an imaginative, insane and heartbreaking ride is nothing less than a thrill. I am grateful to our blessed fans, and to Kevin Reilly and Peter Rice and everyone at the glorious Fox network for allowing Fringe to reach its bittersweet conclusion." Executive producer and showrunner J. H. Wyman said, "Above all else, from the bottom of my heart, I would like to personally thank everyone involved with Fringe. From the most amazing fans, to our incredible cast, writers and crew, and our wonderful partners at Fox and Warner Bros. – we would not be here without you. It simply cannot be overstated how grateful I am for the ongoing and unconditional support we have received over the past five seasons. It has been both mind-blowing and humbling. I've always been a fan of science fiction, and to be able to tell this story about a family – a family that, through everything, fought together for survival – has been a highlight of my career. As we approach the final chapter, I can hardly believe it, and I'm just truly thankful for this unparalleled experience." "Fringe has truly imagined the impossibilities over its five seasons and will go down in the books as one of Fox's most riveting and creatively brilliant series," said Kevin Reilly, Chairman of Entertainment, Fox Broadcasting Company. "It has been a blast to work with J.J., Joel and their masterful creative teams, as well as with Anna, Josh and John and the rest of the most talented cast and crew in the business." The Fringe finale will air in two back-to-back episodes. The first part of the Fringe finale is called "Liberty," while the second part is called "An Enemy of the Fate." The Fringe finale airs on Friday, January 18 starting at 8 PM ET on Fox. Check out a two minute preview clip of the Fringe finale below.