, one of the funniest shows on network TV and Bill Lawrence's follow-up to his smash hit sitcom Scrubs, returned to the airwaves this week after a very long hiatus. To celebrate, we here at ComicBook.com have put together a short list of five of the most kick-ass women over 30 in comics, only one of whom has recently been retconned to be under 30 again.

Yeah, yeah, we considered a list of comics's hot moms, but that's sexist, a little bit creepy (they're cartoons!) and doesn't allow for us to share pictures of Aunt May holding a gun she clearly borrowed in the '70s after a one-night-stand with "Dirty" Harry Callahan.

Aunt May (The Amazing Spider-Man)

Spider-Man's Aunt May is best known as being an aging, frail liability to the hero who's constantly in danger and frequently at death's door. But she's had more brushes with supervillains than just about any other old lady you can think of and always comes out on top. She's even shown characters as intimidating as Venom and Wolverine who's boss, as seen in the illustration below.

It should also be noted that it's Peter, not May, who gives readers the impression that she's a delicate flower who desperately needs to be treated with kid gloves. Back during the infamous One More Day debacle, May told Peter that she'd had a long, good life and that he and MJ deserved the same, so he should let her die. He didn't listen and instead made a deal with the devil. I'm looking forward to the day May finds out all about it and whups him within an inch of his wall-crawling life.

A fan favorite in Bill Willingham's Fables, Frau Totenkinder is one of a couple of powerful, magical characters on this list whose kick-ass-ness is really only clearly evident once in a while when she has to take it out of the holster. Most of the time, people defer to her becuase they know what that adorable exterior is hiding and she doesn't actually have to do much. As the old crone who tried to show Hansel and Gretel into an oven, she's best known for her defeat at the hands of a couple of kids but over the centuries she's built up a formidable magical arsenal and there are few in the world who can challenge her. 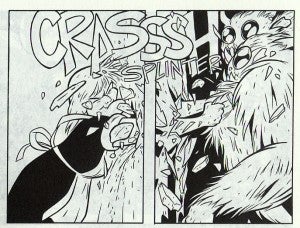 Her own miniseries shed a little light on her past as the Queen of Atheia, but it's really her relationship with her granddaughter, Thorn, and the Bone cousins that would help to establish her as one of the great characters in comic book history.

Every character in Jeff Smith's Bone is arguably the best of its kind--but Gran'ma Ben is notable in that she's the embodiment of both the sweet old lady who's happy to help and take care of anyone...and the mama bear who'll take your head off if you're not careful. From her earliest appearances, readers learned better than to underestimate the character, who "fought th' rats in th' big war" and still does, every chance she gets. 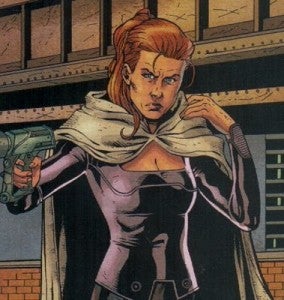 Remember back about five or ten years ago, when Iris was a grandmother? That's what we're talking about here. This weird 20-year-old version with no backstory and no nephew and no grandson and no soul isn't the Iris I know; she's just another hot superhero girlfriend.

Iris Allen fell a little into the Aunt May mold for a while after her husband (Barry Allen, the Silver Age Flash, who's The Flash again these days because the Silver Age is back at DC) died in Crisis on Infinite Earths. She returned to interact with her nephew, the then-current Flash, occasionally and oddly and played a much bigger role in the series once Bart Allen--her grandson, born a thousand years in the future where she had spent the last of her years with Barry--entered the picture as Impulse (later, Kid Flash, then Flash, then Kid Flash again). She was frequently the target of villains who saw her as the chink in Wally's armor bot those villains almost always got more than they bargained for. Even if she wasn't a physical threat (see picture at right), she still managed to play a major role in defeating at least a few of them by being, basically, the world's foremost expert in The Flash and what he was able to do if she only gave him an opening.

"Her story is over--because you wouldn't have it any other way."

That's how we first came to know Mary the Revival, who came out of cryo-freeze into the strange and terrifying world of Transmetropolitan only to find that her beloved husband had died too far away from a cryogenics facility and would not be joining her. After the initial shock of discovering the mad world she now lived in (something common to revivals), she became the target of a story by "outlaw journalist" Spider Jerusalem, who shared with the world what they were missing by treating people like Mary as though they were a drain on society and not taking advantage of all she could offer them.

Spider didn't make that mistake, though, and periodically came back to Mary when he needed boots on the ground. In the end, she helped him take down a corrupt President, all while sitting on a park bench snapping pictures with a cheap camera Spider gave her.

If you haven't yet, go read Transmetropolitan #8, Mary's first appearance. It's available on ComiXology or in the second trade of the series, and it's one of the best single-issue comics you'll read in your life. And check out Cougar Town, Tuesdays at 8:30pm EST on ABC.

Seriously, do it--or I'm sending Gran'ma Ben after you.

Daredevil Star Reveals Why He Was Reluctant to Do Show