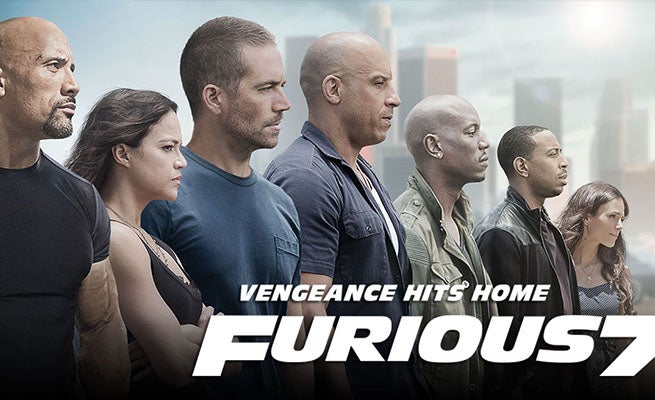 Last night at the South By Southwest Film Festival in Austin, Texas, attendees received a surprise treat- there was an unexpected screening of Furious 7. The consensus is not surprising so far, as most people are talking about implausibility being trumped by fun, but what more do we expect, right?

Several critic reviews have surfaced and we've rounded them up for you below:

"Plot is unimportant. Family is everything, and 'Furious 7' is a blast." -Drew McWeeny, Hit Fix

"Furious 7 is certainly a popcorn movie geared towards delivering big thrills, but it's also oozing with heart and passion." -Perri Nemiroff, Collider

"Anyone who can buy that bit of computer-generated idiocy should have no trouble believing Paul Walker is in this film from start to finish." -John Defore, THR

"It is truly a blast of a film that combines fantastic action, humor, and a lot of heart. A new high for the family and a dignified sendoff for one of their own." -Jon Partridge, Cinapse

"Even with the tough choices [Wan] made out of necessity in order to keep Paul Walker in the film, this might be the best-looking and best-edited Fast & Furious so far." -Matt Singer, ScreenCrush

If those critic reviews aren't enough for you, fear not! Many of the people who were piled into the theater for the Furious extravaganza tweeted their thoughts afterwards and for the most part, they sound extremely fun and positive.

Once I invent this time machine thing, I’m gonna grab the Lumiere Bros and take them to see the splendor of #Furious7

World premiere of @creepypuppet's FURIOUS 7 played huge. No way you pay money to see this movie and walk out dissapointed.

Fast and Furious 5-7 = Greatest Action Trilogy of All Time. Done.

FURIOUS 7 is so, so good at ensemble action. So many moving pieces all deftly managed. Sells the insane with ease, the emotion with grace.

FURIOUS 7 is exactly what you want it to be. Unreal action sequences, tons of badass & a fantastic send off for Paul Walker. #sxsw

Furious 7: any attempt of realism has been completely abandoned. More outrageous stunts & dialogue than ever. Unfiltered fun! #ForPaul #SXSW

#Furious7 was an action-packed blast. #SXSW DUG it. If these movies keep being so damn fun, there's no reason for the franchise to ever die.

#Furious7 finally made me a believer. Not an drop of cynicism or physics in the entire film. Loved it top to bottom. Cars DO fly. #SXSW

FURIOUS 7 never feel like a complete movie, lacking the ensemble-driven focus of the last two. It's silly. It's fine. It's a little tedious.

Furious Seven is everything you want it to be. Plus Kurt Russell & The Rock deliver. A fitting swan song for Paul Walker. See it. #SXSW

I've seen a lot of dumb movies, and FURIOUS 7 is among the dumbest. That might be a compliment. I can't even tell anymore.

FURIOUS 7 took a lot out of me. As expected, it's filled with intense, bonkers action and a lot of heavy heartedness. #SXSW

Whether or not Furious 7 is actually a good movie will be up to you but it seems certain that you will leave the theater satisfied after an adrenaline pumping thrill ride of fun. Are you as excited as I am for Furious 7?