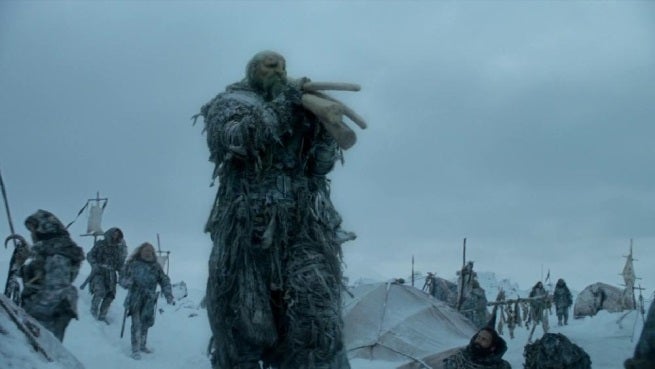 Tonight’s episode of Game of Thrones, “The Watchers on the Wall,” features the Battle of Castle Black. The creatures known as giants play a major role in this battle, based on the way things go in the books. We’ve seen a brief glimpse of a giant in a past Game of Thrones episode, but not much else. Here’s some background on the giants of George R.R. Martin’s fantasy world.

Giants are huge humanoids, standing 10 to 12 feet tall. They’re covered in fur and are incredibly strong, able to bend iron bars and swinging huge tree branches like clubs. They have a somewhat apish build.

Giants aren’t very smart, but they do have some intelligence. They are able to speak the Old Tongue and ride mammoths the way humans ride horses. They have no king or ruler, but have joined Mance Rayder’s united tribes.

Not much else is known about giant culture, but it’s interesting that they are about the only strange beast from Old Nan’s tales that can be verified as existing. According to Old Nan, Bran the Builder used giants to the build the Wall, though the Free Folk say he enslaved them with magic. Other creatures, like the Children of the Forest and, before recent events, the White Walkers were believed to be myth even by the Free Folk.

Game Of Thrones: Who Are The Giants?