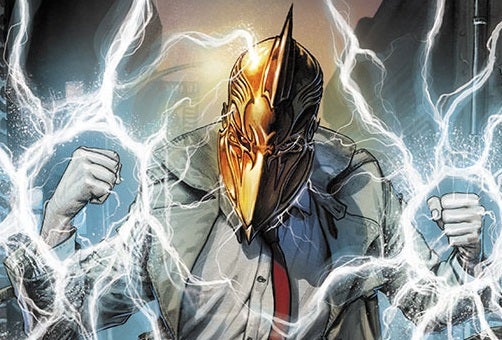 Moments ago, Constantine's pilot revealed that, yes, the helmet of Doctor Fate exists in the world of the series.

And, no, that isn't just for show.

In a recent interview with Buzzfeed, DC Entertainment Chief Creative Officer Geoff Johns said that he's open to the idea of using existing DC shows like Arrow, Gotham and Constantine as potential inspiration, or even jumping-off points, for new shows.

He specifically called out The Spectre and Doctor Fate, saying that if Constantine can give somebody an idea for a Doctor Fate series, he'd love to hear it.

We’re trying to utilize as many characters as we possibly can, but there is a conscious effort to explore the DC universe. Like on Constantine, we already have Jim Corrigan, we put Dr. Fate’s helmet in the pilot; that wasn’t just an Easter egg. I like the term Easter egg, but I prefer all our easter eggs actually lead somewhere, that they’re foreshadowing. So a lot of the things we’ve planted in these series are there to lead to and introduce new characters.

One of the great things about Smallville was that it introduced Green Arrow, so there was an awareness. And even though Arrow is a totally different character, there was some pre-awareness for the character that, I think, helped The CW get behind the show. The more we can get these characters out there, the more people are aware of them, and become inspired by them. There might be someone out there who sees Dr. Fate on an episode of Constantine and suddenly they love that character and they become a creator later on and tell me they have a great take for a Dr. Fate TV show. That’s what we want to happen. We want to inspire people with this stuff. And we want to get it out there. Like, I can’t believe Gorilla Grodd’s gonna be in a Flash TV show. That’s insane. Like, I say it out loud and I still think it’s insane. But that’s what we want to do; we want to break new ground. Like, Firestorm [Robbie Amell] is going to be seen in live-action! We’re going to have a freakin’ Justice League movie! How crazy exciting is that? To see all this stuff happen, it gets me really, really excited. Who ever thought we’d see an Ant-Man movie? Like, if you’re a fan of superheroes or comic books, to see all this stuff coming to life — and done with skill and talent … we never could have made a Flash show with effects like this a few years ago.

Fate appeared in live-action form on Smallville, of course -- in an episode written by Johns. Constantine airs Friday nights at 10 p.m. ET/PT on NBC.