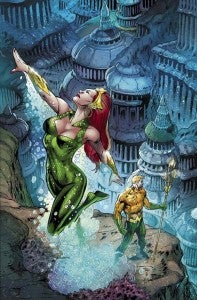 DC Entertainment Chief Creative Officer Geoff Johns will leave Aquaman following November's #25, to be replaced in December with Batman '66 writer Jeff Parker. Solicitation for Aquaman #26, which debuts on December 31, is below.

"Aquaman is one of the greatest characters at DC Comics and one of my favorites," Johns told IGN. "Ultimately, there are some reveals coming up in the “Death of a King” arc through issue #25 that sets the stage for his world and some of those threats are going to carry over to Justice League in a pretty big story next year. But between making Forever Evil and Justice League the best they can be and Gary [Frank] and I doing Batman: Earth One, issue #25 felt like the right time to bid farewell to him for now."

He added, "I think we put him back on the map. The thing I’m really proud of is the fact that Ivan and Joe [Prado] were there for most of it with Blackest Night, Brightest Day, and the Aquaman launch. I feel like not only did we put Aquaman back on the map, but we put Mera on the map, period. I don’t think she’s ever been a character people had really considered before, and I think having those two characters out there as strong as they are together with the mythology that’s there, I think Aquaman feels – and deservedly so – like an A-list, premier DC hero. I hope that carries on; it certainly will carry over to Justice League."

He's gone, but the new writer is confident that he'll be able to keep the long-maligned character on the A-list.

"In short the upcoming stories are about HIM KICKING ALL GRADES OF AQUATIC ASS," Parker tweeted.

“Sea of Storms” begins with the debut of new AQUAMAN writer Jeff Parker! The Earth’s crust is grinding to life, releasing deadly volcanoes and bizarre creatures…so humanity’s first instinct is to blame Atlantis! And as the plates pull apart, the pressures of ruling a kingdom under siege are weighing on Aquaman and Mera as well!