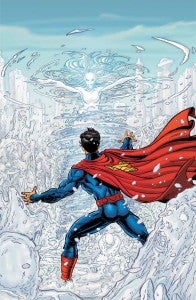 and Bleeding Cool are reporting that George P rez will leave DC's newly-relaunched Superman title after its sixth issue ships in March. P rez, a veteran of the comics industry whose credits include Wonder Woman, The New Teen Titans and the historic Crisis on Infinite Earths maxi-series, has been both writing and providing breakdowns for Superman. It's possible that P rez may remain on the title as an inker/finishing artist.

Newsarama's "multiple sources" indicate that those roles will be filled by Keith Giffen and Dan Jurgens--who work with P rez on Green Arrow--effective Superman #7, although it doesn't clarify exactly what each creator would be doing. Each are writer-artists and Giffen provided breakdowns for DC's 2006 hit 52. Presently they're co-writing Green Arrow with Jurgens providing pencil art and P rez on inks. Besides Green Arrow, P rez has inked Dan Jurgens's pencils for a long run in Teen Titans back in the 1990s.

Jurgens is one of the contemporary creators most closely associated with Superman. He wrote Superman from 1991 to 1999 and drew the title from 1991 to 1997, including the popular Death of Superman story which remains the best-selling American graphic novel of all time, according to DC Comics. That story spurred numerous adaptions in prose, film and video games as well as being the jumping-off point for the creation of popular characters like Steel, the Cyborg Superman and the Connor Kent version of Superboy. He also helped to write and draw Superman: The Wedding Album, which married Lois Lane and Clark Kent. In the DC Universe of the New 52, much has been made of the fact that revised continuity has made that story apocryphal.

When DC's December solicitations were released last week, there was no George P rez cover for Superman #4, and a stock splash page by Jesus Merino was used. The page appeared in this week's Superman #1. Those same solicitations revealed for the first time that Giffen and Jurgens had taken over writing duties on Green Arrow from current Captain Atom scribe J.T. Krul. This is the third writer to leave or be removed from a New 52 title, following John Rozum's departure from Static Shock earlier in the month.

With Giffen, Jurgens and P rez juggling roles on Superman, Giffen co-writing and drawing O.M.A.C. with DC Entertainment Co-Publisher Dan DiDio and Jurgens still writing Justice League International, one has to wonder what, if anything, this move might mean for Green Arrow. Still, Bleeding Cool points out that it seems many of the New 52 titles (or at least the agreements made with creators for those titles) have been planned out in six-issue arcs, to accommodate trade paperback sales and to give both DC and the creators maximum flexibility. It's possible that P rez never meant to stay on the title for longer than this, and/or that Green Arrow could be set for a new team by the time Giffen and Jurgens move to Superman.