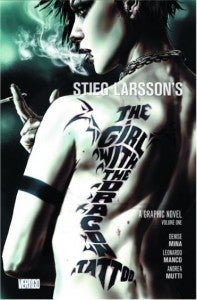 DC Entertainment reportedly delayed the release of The Girl With the Dragon Tattoo Volume 1 hardcover graphic novel from last Wednesday until today in order to accommodate a major promotional campaign--or at least as major as comic book publishers undertake. Written by Denise Mina and featuring art by Leonardo Manco and Andrea Mutti with a cover by Lee Bermejo, The Girl With the Dragon Tattoo Volume 1 is available in comic shops as well as traditional bookstores and on digital formats including Nook, Kindle and iPad. The best-selling novel by Stieg Larsson, part of the so-called "Millennium Trilogy," will be published in two parts, with the next hitting stores in 2013 (no specific date is yet set). Mina will adapt all three books in Larsson's series into a total of six graphic novels, an ambitious undertaking that also represents her first comics work in a while, as she's spent the last several years focusing on her work as a novelist, for which she was recently shortlisted for the UK's National Book Award for Crime & Thriller of the Year. "Compared to prose, comics are great at action," Mina told Mulholland Books in an interview just posted. "I'd argue that comics are better for action than film too. The fraud plot lines were easier in comics than in prose and just impossible in film." Mina was somewhat critical of both film adaptations, overall--the character, played by Prometheus's Noomi Rapace in the Swedish original and then by Rooney Mara in the American version directed by Fight Club's David Fincher, got the short shrift in both, she says. That's something she aims to redeem in the comics adaptation. Thanks to Comic Book Movie for the embeds.

Girl With the Dragon Tattoo Comic Gets 2 New Trailers