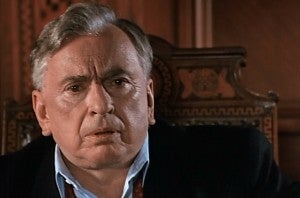 Famed author, activist and actor Gore Vidal died yesterday at age 86, according to a statement made by his family on his website. His nephew, Burr Steers, informed the media that Vidal died of pneumonia.

While Gore Vidal doesn't have an obvious link to the world of comic books (although he did appear, playing himself, on The Simpsons and Family Guy), his contributions to popular culture as a dramatist, essayist, novelist and performer should not be overlooked. Newsweek once called Vidal "the best all-around American man of letters since Edmund Wilson," and the impact of his contributions to the culture--which include novels, non-fiction books and essays, plays and film screenplays including Caligula and Ben-Hur--will continue to be felt long after his passing.

"Style is knowing who you are, what you want to say, and not giving a damn," Vidal once said, and it's that philosophy that allowed him to explore a wide variety of interests and professions without concern for things like being openly gay-bashed in print by his political rivals.

I came to know of Vidal in college, when I first saw the Tim Robbins film Bob Roberts (directed by Green Lantern star Tim Robbins), in which Vidal played an ineffective Pennsylvania Democrat ousted at election by a deeply narcissistic and corrupt young musician in a U.S. Senate election. Vidal, who was releated--either by blood or marriage--to Jacqueline Kennedy Onassis, Jimmy Carter and (reportedy) Al Gore, knew a little something about the political process in America, and it came through in one of the most beautiful performances I've ever seen onscreen.

‎"What's behind Bob Roberts?" asked his character in the film. "I don't see anyone at home. I will say once or twice in our debate I detected the odor of sulfur in the air."

Vidal, who ran for political office a couple of times himself, was not particularly fond of either political party and, while he was often associated with liberal causes, he identified himself as a conservative, asserting that his family had been involved in U.S. politics since the 1690s.

His politics were of only marginal interest to me, though; my favorite of his works is Death Before Bedtime, a high-society murder mystery where the lead is a PR man reminiscent of Gregory McDonald's acerbic reporter Fletch. A few months back, re-reading the book and struck by it, I actually reached out to Vidal's people, to no avail, in the hopes of adapting the book to comics.

If you're unfamiliar with his works, do yourself a favor and check some out. His historical novels are alternately praised for being engaging and entertaining, and lambasted for being historically inaccurate--but his pure writing style is generally unchallenged and so going into a book with the right expectations is really the key.

We'll leave you with the words of Lisa Simpson: "My only friend is Gore Vidal--and even he's kissed more boys than I have."