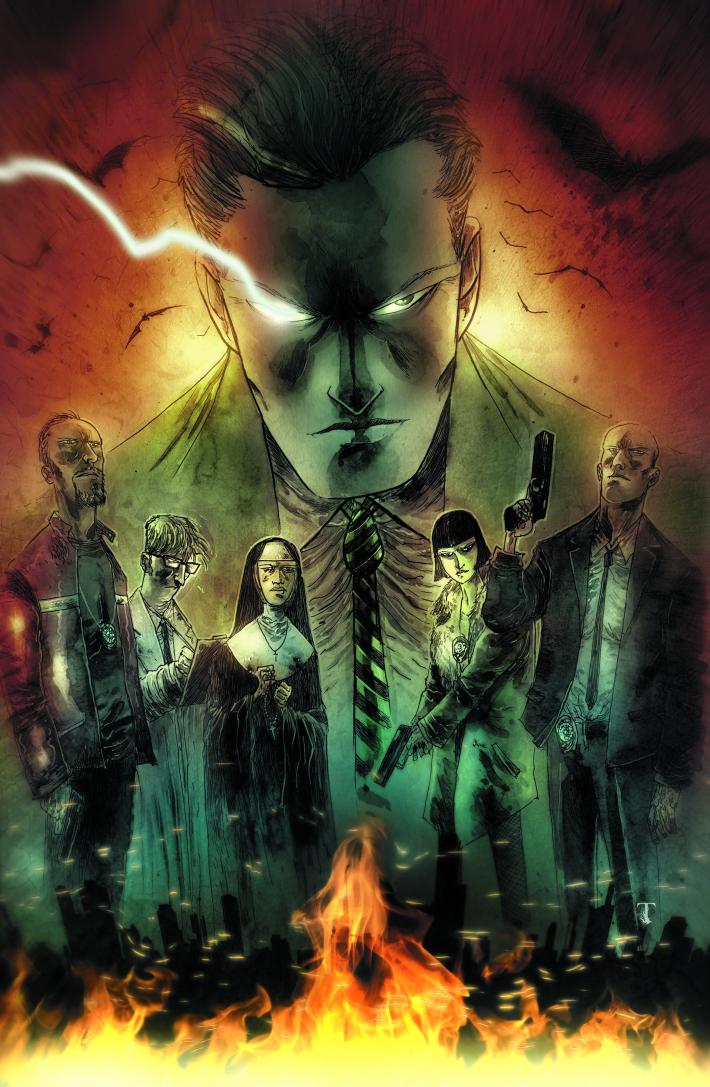 Under editor Mark Doyle the Batman line of comics has undergone a renaissance that reflects a diversity of style, stories, and perspectives. Gotham Academy, Arkham Manor, and Batgirl have all brought something unique to the table and broken the consistent house style and mood of the New 52 line of comics. Gotham by Midnight #1 is no exception to this trend, presenting a comic that is like nothing else published at DC Comics.

That presentation is clear from the very first page drawn by Ben Templesmith. Templesmith has developed a strong following amongst comics fans, but this is his first monthly comic published by one of the "Big Two". His style is overtly moody and exaggerated; he is a true auteur in mainstream comics. His deep, dark colors form a deathly pallor over the already gaunt images he drafts. The most powerful element of his style is the ability to create a disturbed mood and horror-wrought settings. Paging through a comic drawn by Templesmith is like wandering through the haunted house of another's mind. In Gotham by Midnight, the city is not shown to be a city, but the nightmarish imitation of one. Even the most passive of scenes, resting in an office or riding in a car, are loaded with a sense of imminent doom.

Templesmith's characters are ghosts moving through these pages (mostly metaphorical ones). They are all tall, skinny, gaunt figures, wrung out and washed up. It's a moody representation of people that reflects the type of story in which they exist. The characters and setting, along with the procedural premise of the comic all draw an obvious comparison to a previous comic by Templesmith and Warren Ellis: Fell.

Fell was another police procedural set in a city haunted by forces beyond human comprehension. The setting loomed above characters in a threatening manner, strange markings created broader mysteries, and the police stalked through the city like the very ghosts that seemed to haunt it. There are far worse comics to imitate, but Gotham by Midnight feels somewhat hollow in comparison, requiring the inclusion of familiar figures like Batman and The Spectre rather than blazing its own trail.

That is not to say that Ray Fawkes fails to create an interesting cast or mystery. He composes a central group of five men and women who each bring their own personality into play in this first issue. The two consultants bring a lot more to the table than some of the actual officers whose roles feel vaguely rote. Fawkes' mystery in this first issue is the most intriguing element though. It manages to move between being intriguing to funny to creepy. Progression between each step in the mystery is understandable and the revelations build the story rather than just pushing it along. The final page reveals that Templesmith is not just creating mood, but monsters as well with an incredibly creepy splash. The antagonists in this supernatural mystery appear be far more original than the superheroes who confront them.

Perhaps the biggest flaw with Gotham by Midnight is that while it is certainly something original when compared to the rest of the DC Comics line, it's hardly an original effort in comics. I am all for expanding the horizons of readers who focus primarily on the superhero genre and this series will be great for that purpose. There's nothing truly innovative or new about it though. Everything found here has been done before and done better.

That doesn't make Gotham by Midnight a bad comic. It's well written and well drawn, a fine addition to DC Comics publishing line. There's nothing truly exciting about this debut though. Both Templesmith and Fawkes have done far more interesting work before; this is not representative of them pushing themselves to achieve anything beyond a decent comic book.  Gotham by Midnight is an exciting, moody read by two great creators and there's nothing wrong with that.