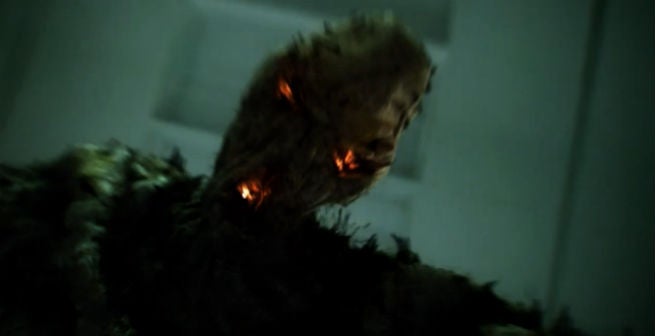 The episode opens in a home filled with religious paintings, crosses and other paraphernalia. A man enters to find his overhead lights woin't work and his window blinds shut. A hooded figure approaches him, and then when he's momentarily distraced, a second hooded figure comes in through the door at him.

Elsewhere, Fish Mooney wakes up in a cavernous old building where people are fighting and screaming. She's approached by a man in a suit, who's having coffee, and then a pair of large, dirty men stand by. THe man in the suit explains to her that they're waiting because the first man to come after a new girl almost always gets jumped by the second man.

She warns the men off, saying that she'll kill the first to come after her in a snap, and the second slowly. They back off.

Following a date, Gordon and Thompkins are walking through the streets in the snow when he says he'd like to come up and see her apartment. She says not tonight; she's starting a new job in the morning. She's coming to work as the new medical examiner. Jim is clearly apprehensive about it, but she kisses him passionately good night and gets in the taxi.

At the home of the man with all the religious stuff, he's identified as a high school English teacher with the same incisions as Gerald Crane's previous victims. Gordon wants to know what Crane is doing with the adrenal glands.

In a lab at his home, Crane is extracting a fluid from the glands and puts it into a syringe. He injects himself with a small amount of it, causing his pupils to dilate and giving him visual hallucinations. He sees his wife, burning to death on the stairs and demanding he help her.

At Wayne Manor, Bruce is packing up to go on a hike. He's going to go on a hike that he used to do with his father every year, but it's his first time alone, so Alfred is worried.

At Fish's club, The Penguin explains what happened to him last night to Falcone. Falcone is nonplussed, telling Penguin to clean up and redesign the club. He ignores Penguin's repeated pleas for protection, saying that the nightclub makes a lot of money and without that money, it's harder to keep control. He's giving Penguin the club; he's publicly with Falcone now, and he'll worry about Maroni.

At the police department, Bullock is looking for clues in the yearbook at the high school where the victim was a teacher. Thompkins comes in, greets them, and then is taken off by Essen to be oriented. Bullock warns Jim that office romances never end well.

In the yearbook, Bullock finds a photo of Dr. Crane, and they go to the school to try and find him.

At the place where Fish is being kept, she talks to the man, Kelley, who stops her from rushing the food when it's slid in by their captors; there's a man named Mace who is in charge, and everyone eats after he does.

In the woods, Bruce is walking on his own when he comes across a pile of stones and pockets one. After he does so, he looks sad and goes back for a second.

At the school, Gordon and Bullock are talking to the headmaster/principal about Crane. She reveals that Crane's mother had died in a car accident. When they ask whether Crane had ever said anything about fear or phobia, she gives them a report Crane had written, saying that fear was an evolutionary throwback. She says he wanted to cure himself of it.

Back at the police department, Nygma is looking at the papers and figures out, more or less, what Crane has been doing. They see that Crane is working on inoculations for himself and a second, unidentified subject. They remember that he said at the support group meeting that he's afraid of failure.

Back at home in the abandoned house, Crane stands in the hallway facing down his burning, angry wife when Jonathan comes to talk to him. Crane is pleased; he's getting over his fear. He asks Jonathan if he's ready to be free of fear.

On a walk, Maroni tells Falcone that the two can do business and be friendly, but nothing will stop him killing Pengin. Falcone says so be it.

At the club, Penguin is worrying about the decorators when one of his men comes to him with invitations that say "Oswald's." Penguin tells him that nothing can go wrong tonight, and instructs Gabe to take the invitations to everyone on the list, except one, which he'll deliver in person.

Fish goes to Mace, saying she just wants a word. She asks why he's the boss when she sees a lot of tough men in the place. He says that he is holding the only blade in the place. She tells him she wants to make a deal with him -- that she may have skills that are useful to him -- "all kinds." If he gives her protection, she says she'll show him. He's skeptical she's worth the trouble, but she tells him he has no idea.

At the police department, Oswald walks in, hoping to deliver the invitation to Gordon. He isn't there, but Nygma is and approaches Penguin, who asks what he wants. There is a brief, awkward interaction before Penguin backs him off with a veiled threat.

When Gordon comes to see Penguin, he tells him that he doesn't want him coming here. Penguin tells him that being rude to him is a mistake, giving him the invitation and telling him to please come Gordon, still upset about how it went the last time he asked Penguin for help, throws out the invitation.

At their "home," Crane injects a full syringe of the inoculation into Jonathan's arm, telling his son to focus on him. Jonathan screams.

In the woods, Bruce comes upon a rock wall piled with smaller rocks, and puts one rock on each of two piles -- based on the number of rocks, it seems that both he and Thomas have done this every year throughout their lives. He picks up the rock marked "TW" and throws it angrily into the distance, kicking over the piles and throwing all of the rocks over the edge of the cliff in a rage. He then takes up his backpack and continues on his walk, stumbling and falling down a steep hillside. He's got an injured ankle.

At the police department, Gordon tells Thompkins that he doesn't want to by physical at work anymore now that they're working together. While they debate the point, Bullock comes with some evidence.

Elsewhere, in a fancy building, Maroni asks Falcone why he's doing all of this for Penguin. Falcone tells him that Penguin is clever, and he likes to have a clever man beside him who knows his place in life. He knows that a freakish little man like him is never going to be the boss. Maroni objects, saying that this is not about money, it's personal, and Falcone says he understands, and asks if he knows Chief Judge Turnbull. Apparently he's someone who both of them have trouble with in the courts. Maroni tells him that if Falcone brings him Turnbull's head and $200,000, they have a deal.

At the police department, Jim says they must be missing something. Bullock suggests going to Penguin. Godon rejects it, and the pair decide to look into his wife's crash. She died in a house fire, not a car accident; apparently, Crane had been giving out a false story for years. They decide to go check out the house.

There, Gerald Crane is staring down his imaginary, burning wife until she vanishes; this is his success. He calls out to Jonathan, who runs from the house. Jonathan says he can't complete the process with more shots, but Gerald tells him that if he doesn't, what they've already done can hurt him. He tells Jonathan they have to go inside before he knows it, and brings his son inside.

At Wayne Manor, Alfred is watching for Bruce's return, looking at his watch and then back at the tree line.

In the woods, Bruce is trying to make a makeshift splint for himself with a stick and some of the items in his backpack. He begins stumbling up the cliffside, grunting.

At the prison area, Fish goes to Mace.  He pulls her down on his lap to talk to him, and she steals his knife and kills him, declaring to the room that she is in charge now.

Gordon and Bullock make their way to the old Crane house. As they come looking for Crane, he and Jonathan flee outdoors into a field under a scarecrow. As they prepare to flee from the police, Crane gives his son a massive dose of the cure -- everything he'll need to be free from fear. Jonathan begins screaming on the ground, seeing the scarecrow come to life and sneer at him.

As Bullock and Gordon advance on the two, Gerald declares that he's not afraid of them and starts shooting. Ultimately they gun him down and call an ambulance for Jonathan.

In the woods, Bruce continues his long trek up the hill, finally reaching the summit where Alfred is camped out with a fire. He sets Bruce down on a log next to him, offering to sit and watch the sunrise with him like Thomas used to. Bruce, suddenly excited, tells Alfred he'll do it "if you can handle it." The pair agree to sit and have tea.

At the sparesely-attended opening for Oswald's, Maroni approaches Penguin, who starts to flee. Ultimately he tells him that everything is now kosher between them, provided he doesn't tell Falcone anything he doens't already know. He warns Penguin that the second Falcone is out of the picture, he'll kill him.

In the woods, Bruce is dozing on Alfred's shoulder when the sun comes up and Alfred wakes him.

At the medical examiner's lab, Gordon comes to see Thompkins. They exchange work-related small talk, before she invites him to the circus with her. He agrees. He asks her to promise him no kissing on the job, and she mocks him, saying that it's not really unprofessional but if it means that much to him, she'll be discreet.

The prison area is being arranged into a mob by Fish and Kelley. As she begins delivering a speech to her new minions, another woman is brought in by their captors. They've taken the woman's eyes.

At the hospital, a doctor tells Gordon that they've never seen anything like what happened to Jonathan Crane's bran before. The effects of the hormones are lingering; Crane is in abject terror all the time. They don't know if it will ever wear off. He says, imagine if all you could ever see, every waking hour, is the thing you fear most in the world. He leaves, and Gordon watches Jonathan thrash against his bed while a scarecrow climbs up from the foot of the bed to attack him. No matter where he looks, he sees it.

Gotham Recap With Spoilers: The Scarecrow