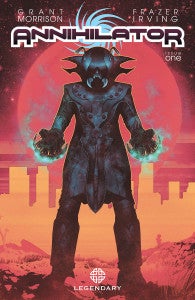 The story, along with other miniseries and one-shots that Morrison is working on currently, is partially intended to give him a break from the kind of epic, sweeping tales that he's been telling on Batman for the last eight years, with his run coming to an end with today's issue of Batman Incorporated.

"I really wanted to step away from the grind of a monthly deadline," Morrison told ComicBook.com at the time. “But that doesn’t mean that I won’t have an idea for my next big, epic project when I’m halfway through these six issues.”

The story centers on screenwriter Ray Spass, who has one last chance to restore himself to former glory as he struggles to write a new studio tent-pole movie, Annihilator. The film follows the adventures of Max Nomax, a sci-fi anti-hero caught in an epic struggle against the authoritarian artificial life form Vada and it’s chief assassin, Jet Makro.

But when Max Nomax appears in real-life, Ray thinks it’s a side effect of the brain tumor he was recently diagnosed with. Despite all logic, Nomax is real, having escaped from an impossible prison with no memory. Ray’s tumor is the key—it contains all Nomax’s adventures, downloaded into Ray’s head before Nomax escaped.

“With [creator-owned comics] you lose the instant emotional connection that people have to something like Superman or Batman,” Morrison explained. “But as a writer, there’s something special about creating a character from nothing and giving him a spark that makes people connect with him emotionally.”

Grant Morrison on Annihilator: "I Wanted To Step Away From the Grind of a Monthly Deadline"