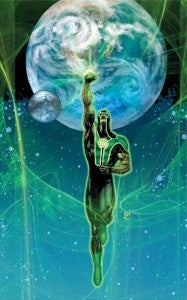 The most important information you'll want to know from DC Comics' Green Lantern panel can be found below.

Kyle Rayner is trying to master all of the colors of rings in an effort to become a White Lantern, which will lead Carol Ferris to try to leverage his powers to resurrect Hal Jordan.

Guy Gardner will be experiencing a lot of  "bad mojo" in upcoming issues and may even be without his ring for some of it.

The Red Lantern title will split into two parts: one focusing on Atrocitus and the other on Bleez and Rankor. Atrocitus will get his revenge on the Guardians...as Dex-Starr will attempt to get on Apollo and Midnighter.

Ion and Parallax are not planned for reintroduction to the DC Universe. To that end, Peter Tomasi had previously advised fans that they might just need to let go of some of the old stories, rather than try so hard to make them fit.

Fans of Mogo will want to make sure they pick up Green Lantern Corps #14.

When asked how soon Hal Jordan might be back as a Green Lantern, the answer was, "who knows?"

Tangentially related, it was revealed that, while no plans are imminent, both Jade and Obsidian have been discussed for use in Earth 2.

And that is all you need to know to be ahead of or on the same page as your friends when it comes to the Green Lantern comic book franchise.