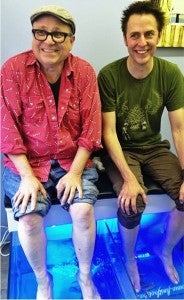 Guardians Of The Galaxy director James Gunn has just tweeted a link to a photo of himself hanging out with another celebrity, which has instantly set off new casting rumors. Linking to a picture of himself with actor, director, & comedian Bobcat Goldthwait, Gunn tweeted, "When hanging with bobcatgoldthwait one gets fish to eat the dead flesh from his feet. It's kinda…"

Of course, since Bobcat Goldthwait is also a director, it could just be two directing friends enjoying a day at the spa together. However, after photos first surfaced of Michael Rooker visiting with James Gunn in England, it wasn't long after that it was revealed that Michael Rooker had been cast as Yondu.

The other thing that makes the photo ripe for speculation is that Bobcat Goldthwait is rather known for his high-pitched voice. In fact, his high-pitched voice has often landed him on fan lists as a favorite to play Rocket Raccoon. While recent rumors have suggested that Bradley Cooper is in negotiations to play Rocket Raccoon, it hasn't stopped speculation that Gotdthwait could be meeting with Gunn about Rocket Raccoon or some other role in Guardians Of The Galaxy.