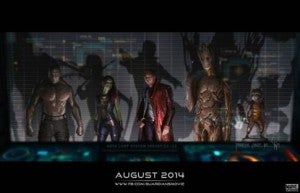 Following on the heels of last night's press conference for Captain America: The Winter Soldier came a similar event for Guardians of the Galaxy.

ComicBook.com was on the scene, and has a recap below. There's more to come, in some things we'll break out into their own little stories, but here's the gist of the night.

Question: I think we're all wondering if we might hear soon about a casting announcement for Rocket Raccoon or Groot. 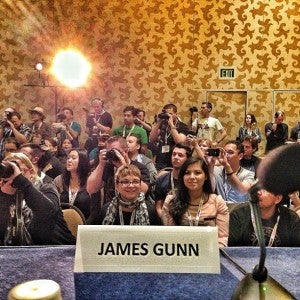 James Gunn: Pretty soon. Pretty soon. Not now-ish. Tomorrow, next week-ish, next month-ish? Kevin? He tells me what to do.

Question: What's the basic moral premise of Guardians of the Galaxy?

Gunn: Oh, man. That's a good question before I flew here from London. Guardians is about a family coming together. Really, it's about a group of individuals who have acted selfishly their whole life, and learning something about themselves that makes them heroes.

Question: Chris, what was the extent of your training to get your body in shape to be Peter Quill?

Chris Pratt: Oh, man, it was just probably about six months--just got after it, combination of different things: lifting weights, cardio and really strict nutrition. So you know, it's like really boring and stuff, but basically I cried forty pounds off and the rest of it was just being hungry and working out.

Feige: He's doing really well, too. His birthday was about three or four weeks ago and I happened to be there and they brought out a tray of vegetables that said "Happy birthday."

Pratt: Yeah, and if any of them was sharp, I would have used it to cut my wrists. 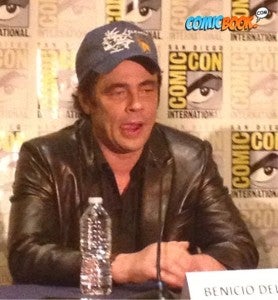 Question: James Gunn, your previous work has tended toward more intense fare, obviously. Are you thiking of trying to get a little more darkly comedic tone with this film and flirting with the R rating?

Gunn: I don't think the Guardians need it. This is a James Gunn movie. When I turned in the first draft, Kevin and Marvel and Joss were really happy with it--that was a really good day--and their biggest note was "More James Gunn," it freaked the hell out of me. So I gave them more James Gunn in the movie.

Question: Coming off of something like Super then having such a huge budget, what has been your experience with the budget on set?

Gunn: It's been easier. On a movie like Super, I get a lot of people on set who I think I can do their job better than they can. In a movie like this, we work really hard to find the best of everything--the best actor for each of these roles, which we worked really hard on to give you this group it was really hard. Beyond that, the best production designer, the best composer, the best costume designer, and so they all make my job a lot easier. 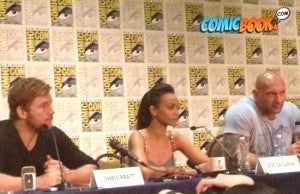 Question: Is it intimidating at all to try and introduce new characters to the Marvel Universe after all these hugely successful movies featuring really reconizable characters?

Pratt: No, there's nothing intimidating about having 200 people looking at you in a press conference. It's easy. I'm not scared.

Karen Gillan: It's exciting. Of course you're nervous. I would be cautious to use the word intimidated because I don't want to be interpreted like I feel any less or any inferior. I feel very excited to be joining the Marvel family of super-heroes and I do believe that Guardians have bigger powers in a way [Laughs]. If we were up against Captain America or Thor, we'd totally kick his ass.

Question: Did you feel any pressure bringing in a fairly unknown quantity like Guardians of the Galaxy after all the hugely well-known Marvel properties that have come before?

[There's a long silence in the room as the rest of the cast and the reporters wait for Rooker to elaborate. He doesn't. Everyone laughs.]

Pratt: I'll just answer a little bit. I don't think the reason the rest of the Marvel films were received so well is becuase they were such famous comic books; they were great stories, you know? And Iron Man is Iron Man now to people because of Iron Man the movie, you know? There's a comic that certain people knew it and it became a movie and they loved it and they come back to it because of the great storytelling.  This is a really cool story and Marvel knows what they're doing. They know how to tell a story, they know how to make this movie so I really don't feel intimidated. If you told me, "Chris, you have to go adapt Guardians of the Galaxy movie on your own," I would certainly be intimidated. But "We're doing it, and we want you to come along?" Wow. I'm certainly along for the ride.

Question: For Dave Bautista - Did your previous experience with the WWE help you at all in preparing for this role?

Dave Bautista: No, and people ask me that a lot. I always tell people it's very nerve-wracking. Going to auditions for me is like the worst thing in the world--just terrifying for me and people don't get it. They say, "You go on, you perform in front of 100,000 people." It's so much more intimate and there's so much attention right there on you, it's absolutely terrifying.

I'm sorry, I lost track of the question. [Laughs]

It's new to me, but I still go to work and I'm a student at this and I'm not afraid to let people know this is new to me. I'm still learning and I'm not afraid to go up to people and pick their brains and ask for advice because to me, that's how you get better. That's how I got better at everything I've ever done is don't be too proud to ask for help. I'm learning a lot every day on this project from the cast, from the director, from the crew--even the film's producers. Just learning, learning. That's what it's all about. For me, that's how you stay young. If you're doing something that you love and you're learning something new every day, that's the key to youth.

Question: Will this movie tie into the larger Marvel Cinematic Universe?

Guardians of the Galaxy: Notes From the Press Conference