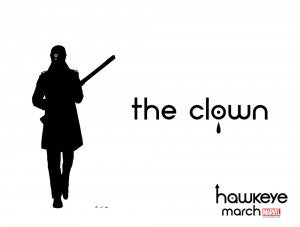 In a cryptic teaser from Marvel Comics, the publisher today announced the introduction of a new villain called The Clown in March's Hawkeye #9.

Yes, The Clown. Bring on the Joker comparisons.

Is this the new villain originally intended to be introduced in #7, and then pushed back to accommodate the hurricane relief issue? Seems likely--he could be seen at the end of #8 and then officially introduced with a first full appearance in #9.

Check out the solicitation information (what little there is) below.

Hawkeye Gets a New Villain in March