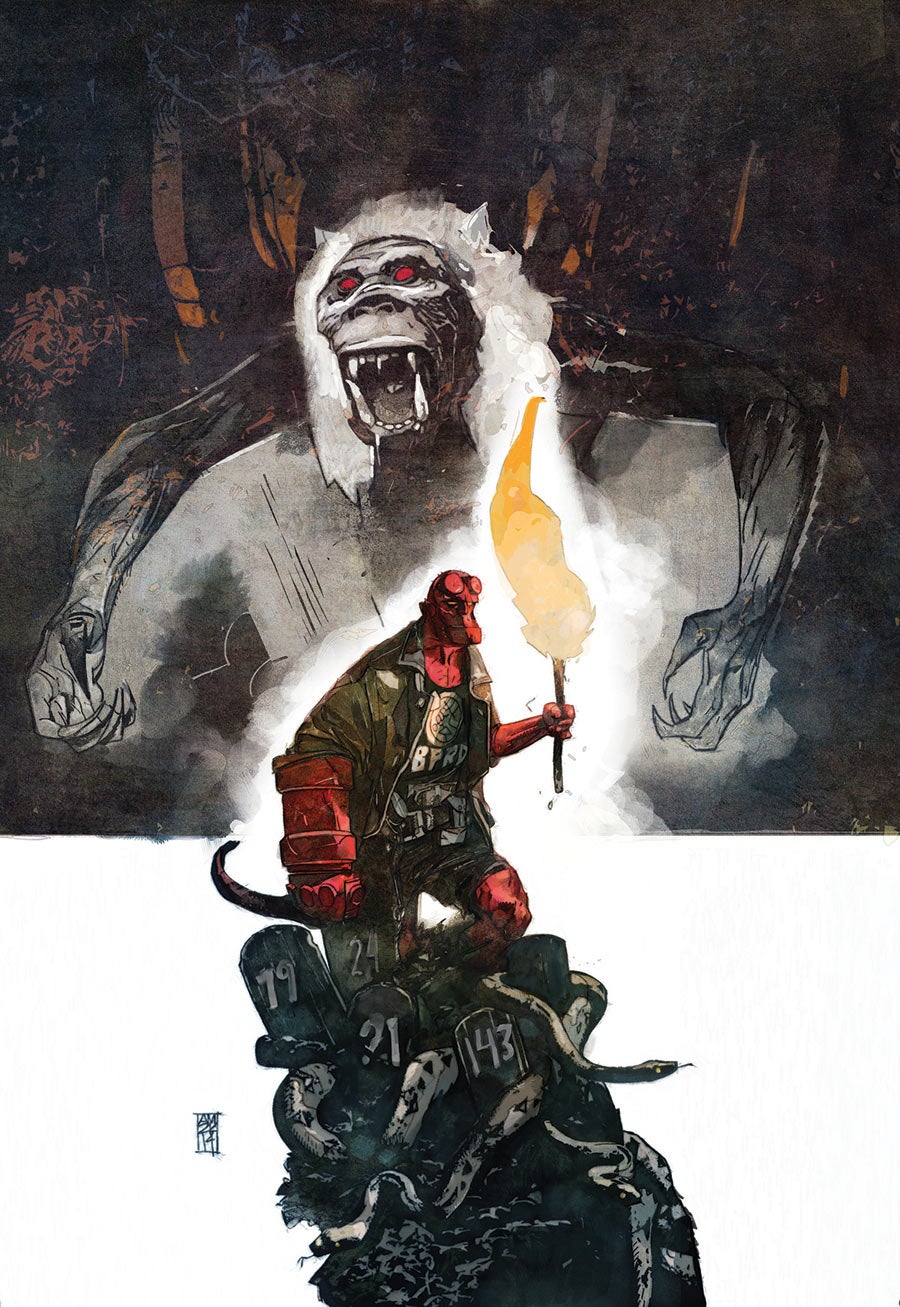 Hellboy and the B.P.R.D. #2 continues to build upon the strengths established in its first issue. Mike Mignola, John Arcudi, and Alex Maleev established a clear tone and strong set of team dynamics in their debut of the now classic character's origin. The B.P.R.D.'s trip to Brazil produced a world filled with mystery and a group of agents who couldn't be trusted to work together. It is the first act of a story prepared to quickly tumble into darkness as things become bad then worse. The second issue does not disappoint.

The menacing castles and darkness continue to pervade the environment in this mini-series, but the real threats have begun to emerge and make themselves known in this installment. Mignola and Arcudi establish that the rumors that drew the B.P.R.D. to South America are valid by unveiling one monster and hinting at something far more sinister. It's the perfect blend of punch 'em up and conspiracy that makes so many Hellboy stories great.

The monster haunting this small town is revealed to be an ape-like beast with enormous fangs and a smooth yellow face. It is referred to as Anchunga (a Portuguese word for a terrible demon) but its origin remains unclear. The only thing that is evident is the effect of its actions, leaving at least one character dead and another bloodied. It's a horrific beast that merges elements of the natural world with the supernatural.

Dave Stewart continues to lay down an ever darkening palette across the landscape of Brazil as things get worse. Each time the Anchunga is revealed it is shown at a distance and in the dark of night. Only the barest outline of its form and its gruesome face are made clear before it emerges to attack. Maleev's action sequences between the Anchunga and B.P.R.D. are fast and brutal. Its claws and teeth tear at the world and leave no opportunity for readers or characters to pause.  While the beast itself may remain a mystery, its ability and attitude are clearly terrifying.

Even with the revelation of a monster, there's still a potent mystery in Hellboy and the B.P.R.D. The darkness that initially conceals the Anchunga also covers the town and its inhabitants. All of the second issue is steeped in this darkness. When demon-apes are not present, new clues are being revealed allowing more questions to be asked about what is actually occurring. Sue (utilizing her supernatural abilities) responds to multiple elements in the town. Her reactions to a cross and castle serve as a narrative dowsing rod pointing to trouble, but not explaining its cause. She is as much an essential perspective as Hellboy, giving readers the most human responses to the horror encountered and some insight into what is occurring.

Hellboy and the B.P.R.D. continues to follow in the tradition of the best Hellboy comics, combining big action with an increasingly fraught mystery. Maleev and Stewart deliver the worsening conditions in every panel and instill both the fast-paced action and slower sequences of exploration with tension. And just before the issue ends, Mignola and Arcudi seize upon a plot thread seemingly abandoned in order to deliver an excllent cliffhanger. This may be the character's first adventure with the B.P.R.D., but it is already reading like a classic.