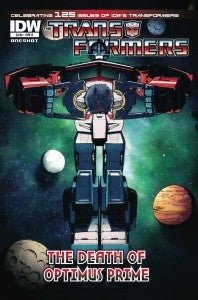 With today's release of  Transformers: The Death of Optimus Prime, it's fair to say that the IDW published series will be undergoing some very new and different story directions come 2012.  No need to worry, as IDW has announced today the release of not one, but TWO new series focusing on the Autobots and Decepticons, all sharing the same great universe.  Under license from Hasbro, IDW will release Transformers: Robots in Disguise and Transformers: More Than Meets the Eye both in January of 2012.

New villains, new stories and new conflicts will arise, and it's the perfect jumping on point for readers who may have felt too overwhelmed by the history of the series up to this point.  “The response to the Transformers ongoing series has been phenomenal,” says IDW senior editor John Barber. “This relaunch is a chance to jump onboard for anybody who might have been missing out. We’ve got big stories planned, and there’s never been a better time to read Transformers.”  Bumblebee assumes leadership, and both books will offer different looks at a new world without Optimus in it.

According to IDW's official press release, "Helmed by writer James Roberts with art and covers by Nick Roche, Rodimus calls on his fellow Autobots to leave Cybertron in search of the Knights of Cybertron in Transformers: More Than Meets the Eye. This lost tribe of Transformers characters is, according to legend, the guardian of the original Cybertronian culture and Rodimus and his followers begin a quest that will stretch to the farthest reaches of the galaxy to find the knights and restore Cybertron to its past glory.

Transformers: Robots in Disguise, written by John Barber, with art and covers by Andrew Griffith, follows Bumblebee and the Autobots remaining on Cybertron. Without Optimus Prime, Bumblebee finds himself in command of a world gone mad. Transformers: Robots in Disguise brings readers through the struggle to rebuild Cybertron as the Autobots, Decepticons, and civilian Transformers, who don’t distinguish between the other two groups, all vie for control."

Be there in January for a new era in a classic, long established series!