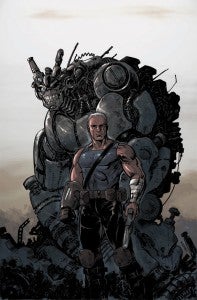 Ken Garing's Planetoid, the story of a grizzled space smuggler who crashlands on a living, metal planet and must fight to stay alive, will be published as a monthly comic from Image Comics beginning in June, according to a press release from the publisher. "The world of Planetoid is that of a vast, abandoned industrial landscape," said Garing. "The story, however, will revolve around the efforts of the planetoid's inhabitants as they struggle together against extraordinary odds in the hope of building something new out of the devastation." The publisher calls the book "the story of man versus machine in a primal struggle," and the transition to print publishing seems like an ironic twist on that theme. Call it the first major title to make the jump from GraphicLy to print following the recent announcement that the popular digital publishing platform would no longer support app-based purchases. The first issue of the series was a digital exclusive through GraphicLy, and between the time it was published and the time the series' first issue hits comic shops in June, GraphicLy's app was canceled. Planetoid #1 will be released on June 13 from Image Comics.