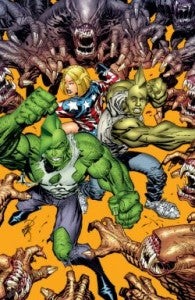 While there will be a ton of attention paid to this week's issue of Supreme, in which Erik Larsen draws the final Alan Moore script for the character before taking off in his own direction next month, Larsen's also got some long-awaited stuff going on in his creator-owned Savage Dragon. An alien invasion that's been in the hopper literally since before Savage Dragon was published as a monthly comic is nothing to sneeze at, and neither is taking that war to two fronts and putting Malcolm and Angel Dragon into some very...uncomfortable situations. As always, Erik Larsen and Savage Dragon superfan Gavin Higginbotham joined us to talk about the issue. Gavin Higginbotham: With this issue we get to see the true scale of the Tyrrus Combine's invasion. There appears to be hundreds or maybe even thousands of ships. If each ship has a hundred or so aliens onboard... Has Earth really got any chance? The stakes have never been higher. Erik Larsen: We'll see. It is pretty high stakes and I have done some pretty crazy stuff before. Don't be too shocked if we end up with a ragtag group fleeing Earth to find a new home if things don't work out. I've done crazier things. GH: The scale of the invasion also has allowed you to bring back a lot of familiar (and some not-so familiar) faces. Is it tough keeping track of who's doing what in these stories? Was it a pain to draw everyone this issue? I don't have every one of the hundreds of characters I've created dialed into my brain. There are shockingly few characters that I can draw without referencing previous appearances. In fact, a short while ago I thought I had a character dialed in but I found that I was so far off that I ended up redrawing the character for the trade. So many characters have died over the years that it really is a pain to keep track of who's alive and who's dead. I've created new characters at times because it was easier than doing research. Thank god for the Wiki! Russ Burlingame: You know, Erik--ironically we get to see Sara Pezzini here, and Tim Seeley told me in an interview for Champion! Magazine recently that he wanted to see her hang with Dragon now that she's moved to Chicago. I guess he got his wish! Tim Seeley always gets what he wants. That's what it's like to be Tim Seeley. That's why we all wish we were Tim Seeley. 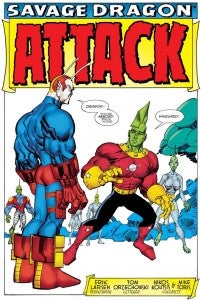 GH: Will we get to see more of the Tyrraneans' social structure? There's some on Earth, some on Kalyptus.... Do these guys just travel from planet to planet, killing everything they encounter? Or do they maintain a home world somewhere? At this point I'm pretty crammed for space so that's likely to be kept for another day. GH: Are the Little Wise Guys the luckiest youngsters ever? Between Daredevil and Silver Streak, they've got some serious protectors. Daredevil and Silver Streak are pals. GH: It was only a couple issues ago that you mentioned not using some characters that died in the previous reality, considering they were similar to resurrections. But here you killed off Razz and KillZone again for good measure. Why the change of mind? Just to ensure that these guys are dead? In any case, SD reader Benny Hasa will be happy. Bringing guys back in any way always feels like a cheat. There's never been a time where I killed somebody off and brought them back (with the exceptions of fake deaths that were intended to be undone) where I didn't feel somewhat dirty for doing it. GH: After killing off another leader of the Vicious Circle, is Overlord back in charge permanently? Or just to get the Vicious Circle through this invasion? We'll see. RB: Is the "voice" that OverLord uses in this book--which seems younger somehow than previous versions of the villain--a hint to who might be behind that mask? They're all hints, really. GH: Mako returns to Atlantis. I guess he gave up the role of king? Or was he just a general when he led the Atlantean army on an invasion a few years back? Mako waffles on that. Ultimately he had given up that life to be at home on the surface. He gave the throne up. GH: The SOS suffer yet more casualties... They must have one of the highest casualty rates of any hero team! It likely is. It's not a safe gig. GH: The last year or so has also featured the best Nikos Koutsis's best coloring on the series. He really seems to be firing on all cylinders. Agreed. He had a couple off issues a while back that had me concerned but he's really bounced back and found his voice. He's done some amazing stuff. Saved my butt a few times.

GH: Dragon picks up a gun again this issue and proceeds to kill a whole mess of aliens. You can tell you enjoyed drawing that badass sequence. The Krylans were certainly taking aback by the carnage. What can I say? After all these years I still love drawing Savage Dragon. It's true. Whenever he's on the page I'm loving life. RB: I can't help but wonder: with the guns seeming to work pretty well for Dragon, does the real question become what chances the Combine have against the combined might of an ARMY of Dragons, if he can get his race to suck it up and join the fight? You might also wonder--just how many weapons would a peaceful race like that have at their disposal? GH: And finally, the stars of our book... It's easy to forget that Angel and Malcolm are still very young. They're dealing with a lot of serious stuff and this huge invasion is the worst thing that they've faced. You genuinely feel their desperation here. The writing end of this has been a lot more challenging with the emphasis shift from Dragon to his kids. Thing is--the payoff is so rewarding. A lot of people are really invested in these characters and I can't help but think that a big part of that is how they've been written.

GH: Angel especially is finding it hard to cope with the situation and... Asks Malcolm to sleep with her? This is HUGE! Was it a tough scene to write? They're all tough to write. I rewrote those lines quite a few times to get what I wanted. Not too blunt--not too vague--it's not always as simple as you might think. RB: Is it safe to assume that if his kids shack up, Dragon probably wouldn't be as blase about it as he was about Angel losing her virginity? No spoilers from me. RB: Regardless of whether they sleep together or not, it seems this will throw their relationship for a loop. It's always seemed more like Malcolm was the one who could potentially fall for Angel, and so to have her proposition him--regardless of the circumstances--has to bring some feelings to the fore for him that might be hard to shoo away when they're no longer about to die. It's a game changer in a series packed with game changers.

HBO Orders Season 2 of The Rehearsal